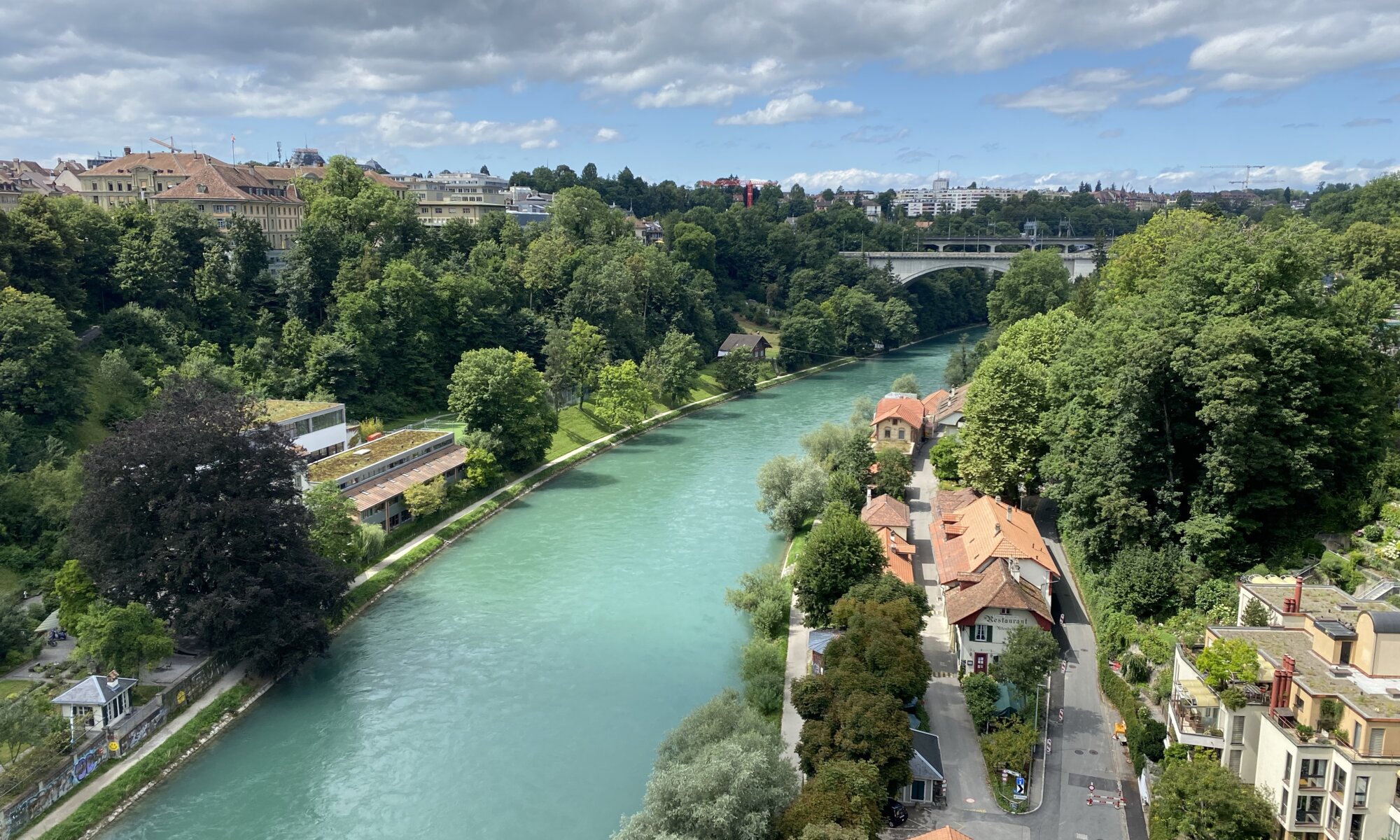 For some years I tried to avoid trips to Switzerland. It is a nice country with beautiful nature, but the prices are just horrible. During the coronavirus pandemic in 2020 I was searching for places I could reach by train and as I’ve never seen the capital city of Switzerland, I booked my ticket. But then our Swiss neighbors held a large yodel festival (really!), and the infection numbers were increasing dramatically. Therefore, it took me another year before I could do the trip.

In the end it was worth waiting for the right moment. Bern is the perfect destination for a prolonged weekend stay. The old town is located beautifully on a mountain circled by river Aare. The old houses, the Berner Münster and the Kramgasse are highlights themselves (and the old town is also a UNESCO world heritage site) – but from the old center you’ve got beautiful views on the clear and colorful river and the mountains. And there is much more to Bern than this.

Bern has a nice museum landscape starting with art museums: the fantastic Zentrum Paul Klee that honors this local painter, the Kunstmuseum collecting the old masters and also the small Kunsthalle. You can follow the traces of Albert Einstein at the Einsteinhaus or – even better – at the Berner Historisches Museum. And my absolute favorite was the Museum für Kommunikation, a playground for all topics around communication.

I enjoyed walking up the hill to take a look on the city center from the Rosengarten. Not far away you can also find the Stade de Suisse which is a soccer stadium known in past times as the Wankdorfstadion – it is the place where the German national team won the world championship in 1954, an important match after the end of World War II. If you need a place to relax you can take the Gurtenbahn funicular to the top of the mountain Gurten and hike through nature. Or you watch the bears at the Bärengraben or roam the nice zoological garden. Close to the Dählihölzili is also the bridge from which people jump into river Aare.

You can explore Bern easily on foot, but there are also many means of local transport: busses, tramways, trolleybuses, trains. Even elevators and funiculars are part of this system. In general, public transport is easy to use in Switzerland. With the SBB smartphone app I had all that I needed to take trains, busses, and ships. Payment was simple because of the integrated ApplePay functionality and the also offer an EasyTicket: you just check in at your starting point and you check out at your final destination – the system then calculates the cheapest ticket.

I left the city for a tour to the medieval city of Murten and I went to the Emmental to learn how the original Emmental cheese is made. One of the best decisions was to go to Thun, a beautiful city at the Thunersee. From there you can get to the top of the Niesen mountain and really enjoy the Alps. And you can also have a nice boat cruise on this fantastic lake surrounded by high mountains.

Switzerland is still a bit special, not part of the European Union and having its own currency, the Schweizer Franken. But you don’t need to worry, you can on the one hand always pay by card and on the other hand ATMs always equip you easily with cash. They also have their own language which isn’t understandable for Germans: Schwizerdütsch. But they switch to Englisch or German when they recognize that you’re lost.

Spending a long weekend in Bern was a brilliant decision and it hopefully cured my desire for mountains and Alpine landscape for a while. The best place in Bern is my special hint: on top of a skyscraper next to the railway station (which is in fact a retirement home) you can find the PinkLime, an improvised rooftop bar with amazing views on the city and especially on the many trains passing by. Apéro (the Swiss get-together with finger food and drinks) shouldn’t be omitted.