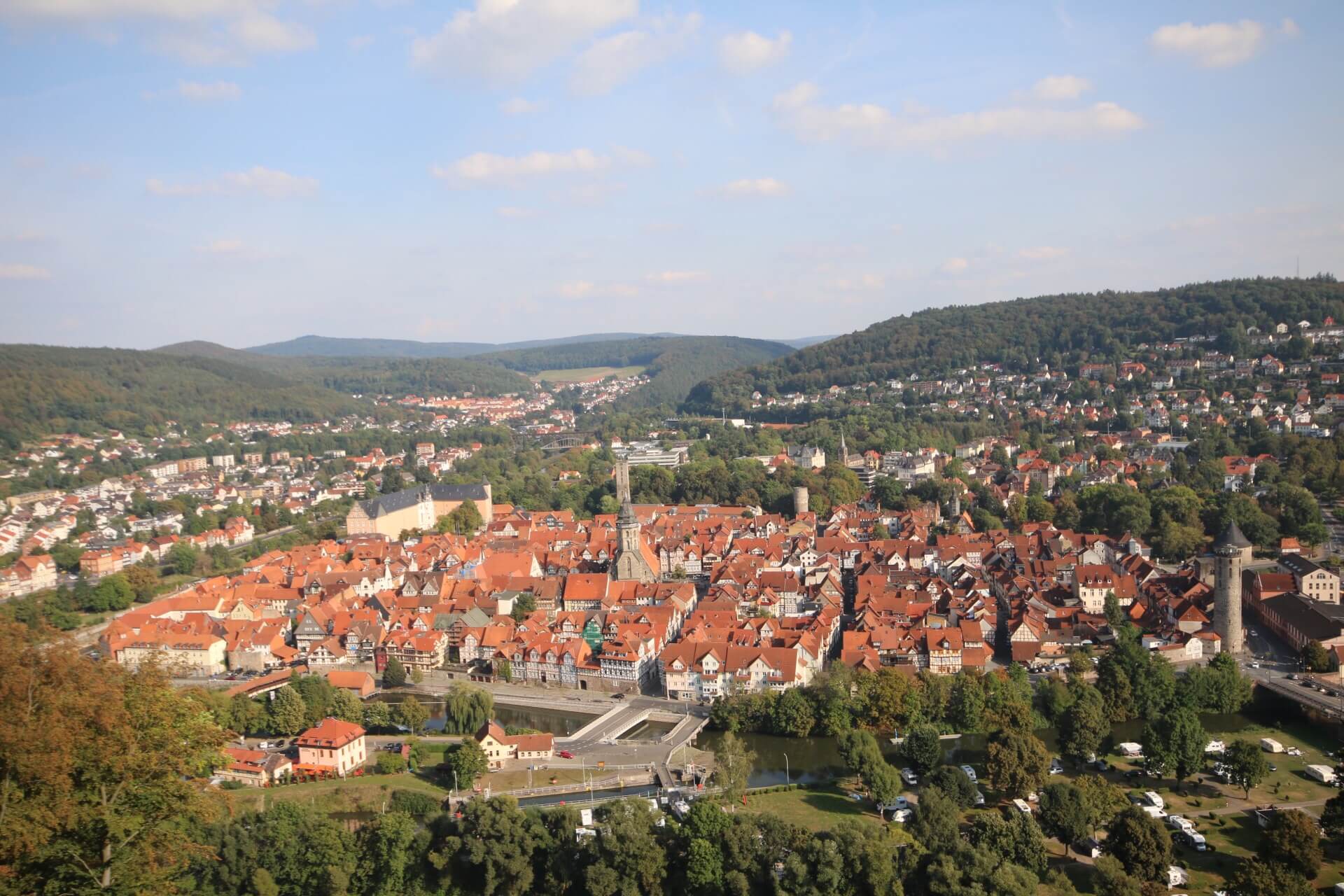 A lovely small town with 23.000 inhabitants between Göttingen and Kassel at the southern end of the federal state of Lower Saxony, close to Hesse. The locals call it Münden but sometimes it is also named by its long name Hannoversch Münden which was used to distinguish it from other cities with a similar name like Minden (Westphalia).

The city is located at the place where the rivers Werra and Fulda meet to form the well-known river Weser. Living in Hann. Münden means living at the water. You can observe this best from the Weserliedanlage or take a boat tour. In addition the city is surrounded by forests belonging to the Kaufunger Wald, the Reinhardswald and the Bramwald. Therefore there are many possibilities to hike and to explore beautiful landscapes.

Hann. Münden is also known for the famous doctor Johann Andreas Eisenbarth who is buried here. Statues of him can be found at different places in the city. The history of the city goes back to the year 800 CE – a village called Gimundi (at the location of the current city quarter Altmünden) existed back then. You can still visit the church ruin of that village, St. Laurentius.

The first document mentioning Hann. Münden dates back to 1183. Richness came as the city received the so called Stapelrecht in 1247 – every ship passing the city had to offer all goods for some days. Still today there is a regular party to remember this, the Stapelmahlzeit. During the Thirty Years’ War the city was attacked by Tilly in 1626 and most of the population was killed. Nevertheless the tower on the place where his attack started is named after him, the Tillyschanze.

During the Seven Years’ War from 1757 on French troops took over the city. A small reminder to these times is the military plateau called Franzosenschanze on the Questenberg mountain. Later Prussian King Wilhelm I brought a forestry university to Hann. Münden in 1868 which became in 1939 a part of the university of Göttingen. The Forstbotanischer Garten also resulted from this development.

Over centuries and until 1961 basalt and brown coal was mined at the mountain Kleiner Steinberg. It was first transported on the – today still existing – Kohlenstraße (‘coal street’) and from 1894 to 1931 by a six kilometers long ropeway to the railway station.

During Nazi times the city saw the full dark load of history including book burning and Reichskristallnacht. The Jewish citizens were deported to concentration camps. During World War II no major destruction happened – only a flood wave from the bombing of the Edersee dam hit the city. In 1945 the military facilities at Gimte and the railway tracks of the Hannöversche Südbahn were bombed and German soldiers destroyed most bridges.

Hann. Münden has three railway tracks: the Mündener Tunnel is the second longest railway tunnel in Germany and leads the fast trains deep under the city quarter Kattenbühl from Göttingen to Kassel and vice versa. The old track of the Hannöversche Südbahn is abandoned and you can walk through the old railway tunnel at Volkmarshausen. And on the new tracks you can pass to Kassel or via Witzenhausen and Eichenberg and Friedland to Göttingen.

The history of Hann. Münden is also connected to state power: from the 18th century on soldiers were trained here. Today policemen and women receive their education in the city. Important local artists are Gustav Eberlein and Heinz Detlef Wüpper.

All blog posts related to Hann. Münden, Germany can be found here:
https://the-passenger.de/tag/hann-muenden/