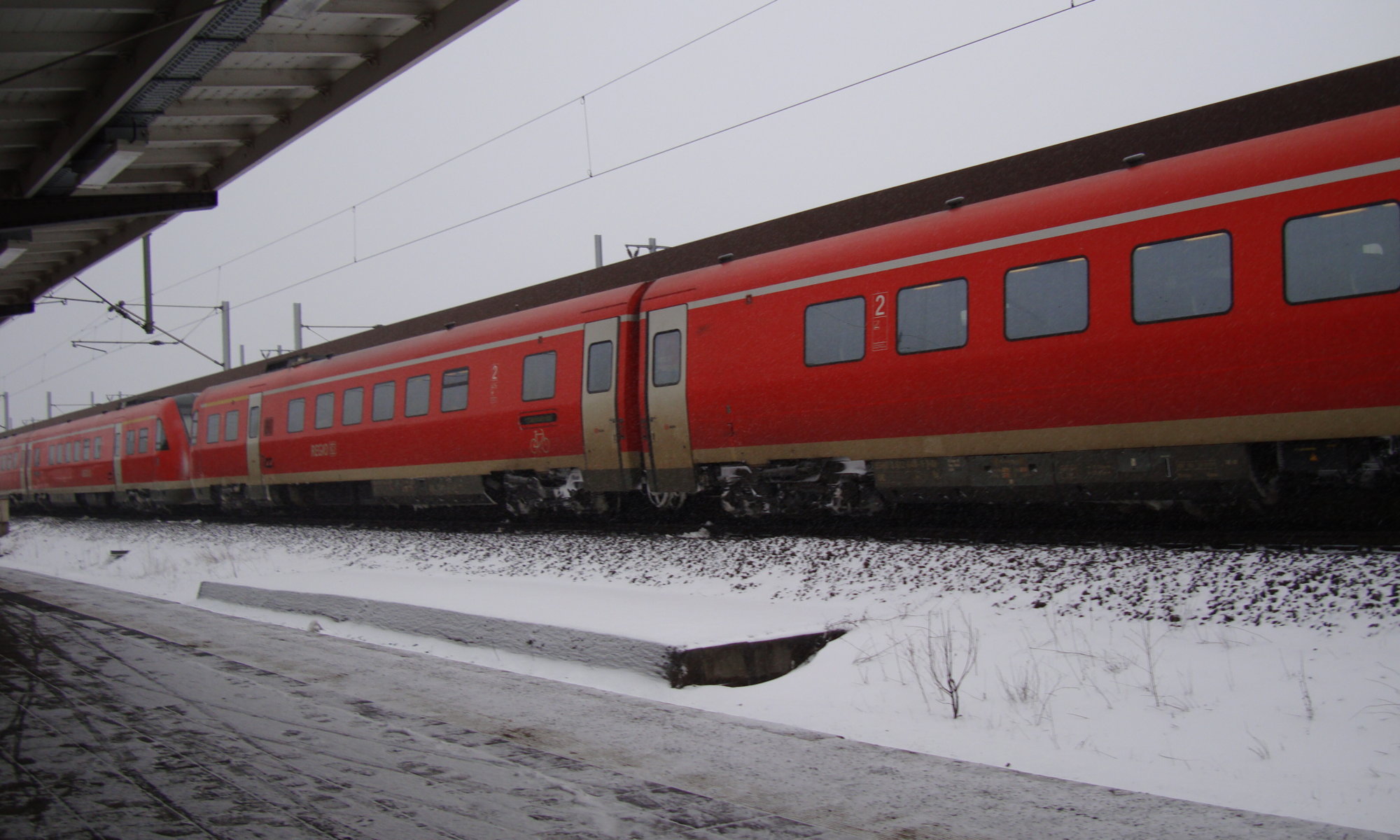 Hann. Münden, Germany is a small city normally well-connected to the bigger cities Kassel and Göttingen around it. Many people live here that work outside of the city. It’s always good to know how to get there and what the alternatives are when facing extreme weather conditions or strikes.

The normal way: by train

Obviously the best way to travel from and to Hann. Münden is using the railway station. The routes and service operators have been changing over time after the liberalization of the transport market. Currently three major operators (Deutsche Bahn, Cantus, Abellio) pass Hann. Münden.

The RB8 line operated by Cantus brings you via Staufenberg-Speele, Fuldatal-Ihringshausen and Vellmar-Niedervellmar to Kassel Hauptbahnhof. From there you can change by regional train or RegioTram to the long-distance train station Kassel-Wilhelmshöhe. On the other hand you’re close to the city center if you plan to go shopping.

Directly to Kassel-Wilhelmshöhe you can get by RE9 using the Abellio. The same track is used by RB2 by Deutsche Bahn (but with stops at Staufenberg-Speele, Fuldatal-Ihringshausen and Vellmar-Niedervellmar). Check the time schedule online. It is useful if you want to catch a long-distance train or if your destination is in the city quarter Wilhelmshöhe.

The RB8 line operated by Cantus and coming from Kassel brings you in the other direction via Hedemünden, Gertenbach, Witzenhausen Nord, Eichenberg and Friedland(Han) to Göttingen. From there it is an easy walk to the city center and in front of the railway station many regional busses or long-distance busses start.

An alternative (not available often) is RE9 operated by Abellio that brings you via Witzenhausen Nord to Eichenberg where you need to switch to RE7 (which comes from Bebra, Sontra, Wehretal-Reichensachsen, Eschwege-Niederhone, Eschwege, Bad Sooden-Allendorf and brings you via Friedland(han) to Göttingen). Eichenberg is an import railway station where different lines meet. Switching trains is easily possible there.

The alternative: by bus

It’s much slower but sometimes you’ll have no other alternative than to go by bus. And I was more than once happy that there are bus lines bringing me to work. That’s especially true in case of a strike of railway employees or when the trains don’t go because of severe weather conditions.

Hann. Münden to Kassel via Staufenberg

Bus 196 starts at the railway station of Hann. Münden and takes the long trip via Lutterberg, Landwehrhagen, Benterode, Uschlag and Heiligenrode to Kassel Hauptbahnhof. It is too long to do it daily and it runs through some heights and is therefore not ideal in case of snow. But it is definitely an option if you want to reach the Kulturbahnhof.

Hann. Münden to Kassel via Fuldatal

A good option that the apps of Deutsche Bahn often don’t show is the bus 42: it goes from Hann. Münden railway station along the river Fulda (with stops at Wilhelmshausen, Knickhagen, Wahnhausen, Simmershausen and Ihringshausen) to Kassel and ends at the first station of the Kassel tramway. From ‘Ihringshäuser Straße‘ you will find a way to your target destination at Kassel. The tramway lines 3 and 6 Start there and take you both to the city center.

Hann. Münden to Göttingen via Dransfeld

A long trip but it brings you to Göttingen: bus 120 goes from Hann. Münden railway station via Gimte, Volkmarshausen, Mielenhausen, Scheden, Dransfeld and Vermissen to Göttingen. It enters the city of Göttingen near the Kauf Park and brings you the railway station. A too long ride to do it regularly – but it is especially good if you want to reach a place in the city quarter Grone.

One Reply to “Public transport”