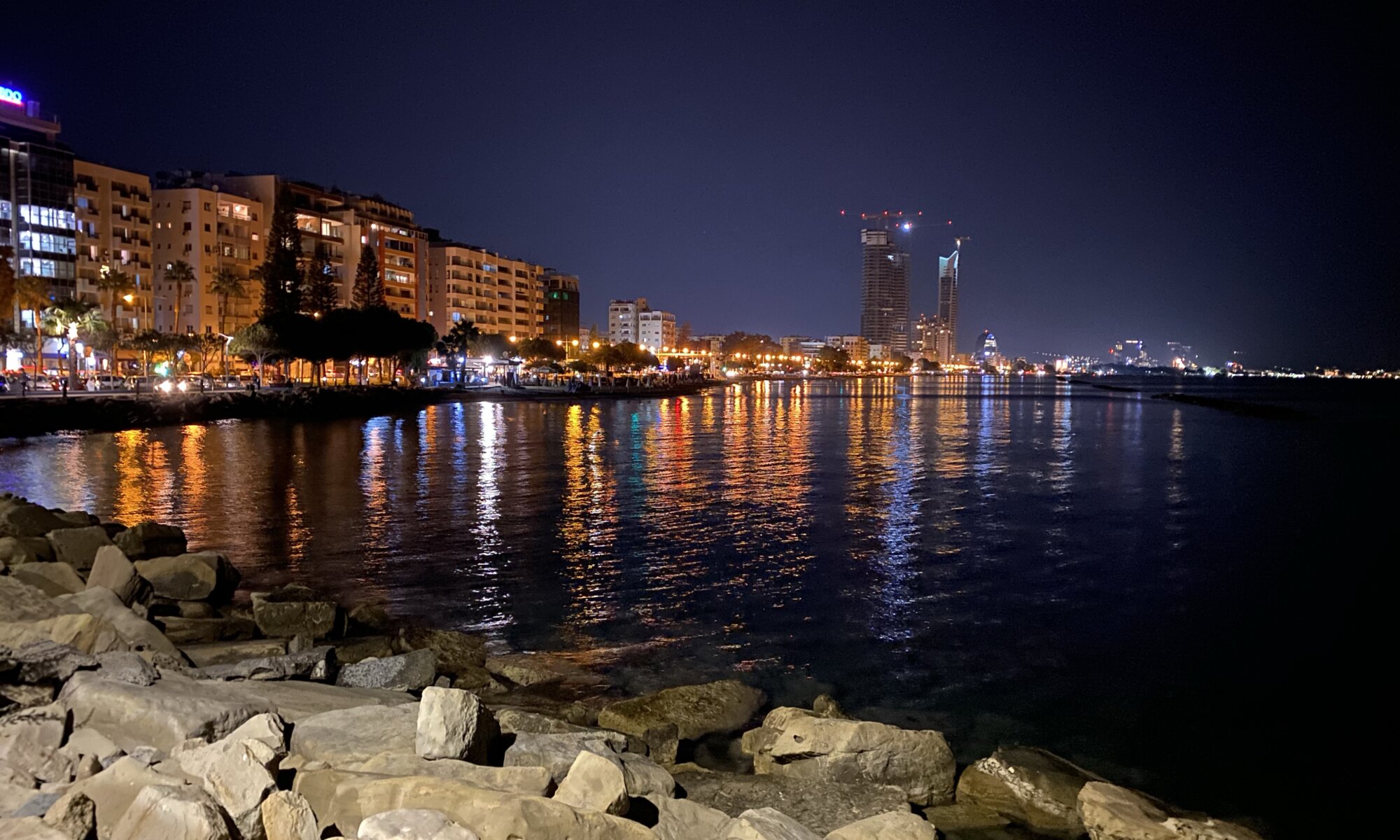 Cyprus is an island in the Mediterranean Sea and currently the most eastern part of the European Union. In fact, it is incredibly close to states like Syria or Lebanon. It is known as the island of Aphrodite (or Venus) and it has an interesting history. The whole island is part of the EU, but it is a divided island with an occupied Turkish northern part. Cyprus is a good place for a summer holiday, and it seems to be to the Russians what Mallorca means to the Germans. And it is a place for relaxation which can already be seen in the local philosophy of life: sigá, sigá; always slowly, always relaxed.

I was not completely following their motto. As I had created a list of places to see on the island a quickly found out that I would have to do a round trip by car: every day a different hotel, everyday driving. Public transport is available and connects the cities, but that would have been time consuming and there are regions, especially in the center of the island, that you cannot reach without a rental car. That’s okay for me as I have fun driving, I just had to train again driving on the left side of the ride. Why’s that? British colonialization.

As always with beautiful islands in strategic positions the rulers change often over time. Cyprus saw Syrians, Egyptians, Persians, Byzantines, Greeks, Romans and Knight Templars come and gone. In 1571 the Osman empire took the island from the Venetians and their reign lasted until 1878. Then they gave it to Great Britain as a tribute for support. Cyprus became a colony of the British and gained independence in 1960 after bloody conflicts. Today the British still have two military bases on the island and sometimes you’ll pass over to the United Kingdom without noticing.

After gaining independence old troubles became visible again. On the island people with Greek and with Turkish roots are living, easy explainable by history. Some of them wanted to become part of Greece in a process which is known as Enosis, the Turkish for sure didn’t want it. To protect them, Turkey occupied the north of the island and proclaimed a new state, the Turkish Republic of Northern Cyprus (TRNC). It is internationally only recognized by Turkey, there is a no-man’s-land running through the island, protected by UN forces. This division is most obvious at the capital city, and it should end as fast as possible.

My entrance point to the island was the international airport of Larnaka, the biggest hub of the island. Larnaka is a beach city with a large salt lake that sometimes host flamingos. Most important sights are the amazing St. Lazarus church and the small castle at the shore. When you’re going further east you can explain small cities in the mountains like Pano Lefkara and you can explore the ruins of neolithic settlements at Choirokoitia.

Next in line is than Limassol, a city obviously beloved by Russians. It has a small castle in the city center and a good night life. And maybe the zoo is the best one on the island. Main sight are the ruins of the ancient city-state Kourion located east of the city, in the British base Akrotiri (which also has a large salt lake).

Archaelogically interested people will love Paphos. There you can see the Nea Paphos achaeological area with fantastic mosaics and a really large Necropolis. The city is also known for beach life and parties, but also a lot of natural sites are belonging to the region of Paphos: the birthplace of Aphrodite (called Aphrodite’s rock) in the west and the Akamas peninsula containing the Baths of Aphrodite and the amazing Avakas gorge.

The most beautiful place to me was the Paphos forest and the Troodos mountains with mount Olympus. Endless forests and roads winding through the mountains, just keep track of the amount of fuel you have. After more than an hour not seeing another car I reached the Kykkos monastery far away from civilization. A place you should see, but there are also nice waterfalls that people use as hiking destinations. But the star of at all is a distributed UNESCO world heritage site: painted barn churches. I visited the Archangelos Michail at Pedoulas and the Panagia tis Asinou at Nikitari. Hidden treasures!

Arriving at the capital city of Lefkosia means learning about the Venetian city structures and the younger history of the island. I had to walk along the green line, see the blocked roads, the military posts and the locked no-man’s-land. But you can also learn a lot about the resistance against British occupation (EOKA) before the island was divided. For sure the interesting history and art museums are also located in the capital city. I saw the Cyprus museum, the CVAR, and the NiMAC; many more are existing but were closed.

At Lefkosia you can also take your passport and walk over to the Turkish north at one point: the main pedestrian street Lidras or Ledras. On the other side it feels like beeing at Turkey and you can visit the old caravanserai Büyuk han and the main mosque that was once a Christian church. Before returning to the airport I also had a look at Agia Napia and the Cape Greco with nice rocky beaches and grottos.

Cyprus is a wonderful island with beautiful nature. And its history is for sure remarkably interesting. Unfortunately, I couldn’t see the Turkish occupied north, but that’s something I’ll have to return for: the locals say it is even more beautiful than the south. How to get to the north? There is an airport called Ercan which can only be accessed via Turkey. There are several border crossings, but you cannot take your rental car to the other side because of insurance limitations. In the end, you can at least walk over the border at Nicosia and start from there. I’ll try it out.