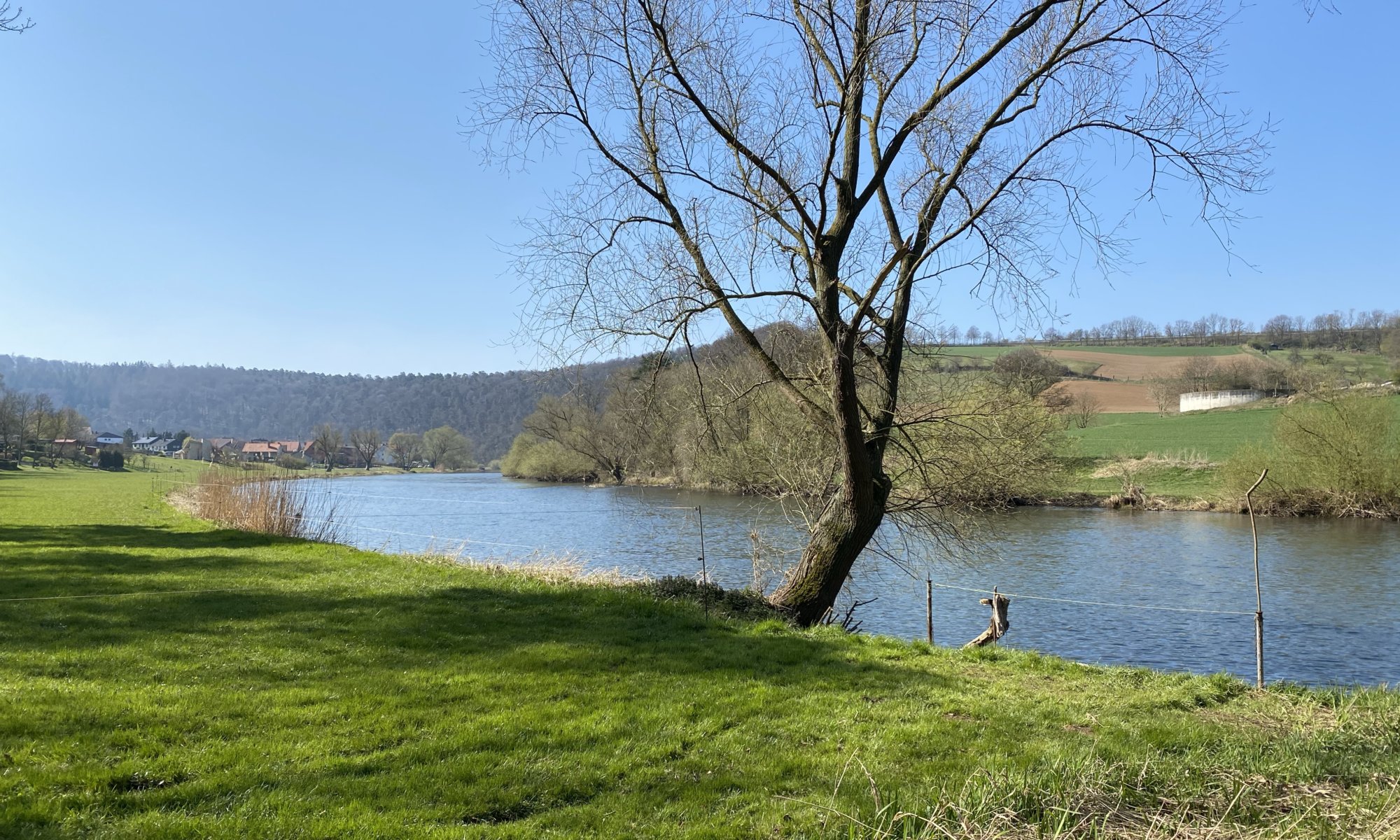 If you managed the trip downstream from Kassel to Hann. Münden by bike you might be ready for the trip in the reverse direction: upstream to Melsungen. The way is a bit more hilly and sometimes you’ll have to ride on ordinary streets which are also used by cars. This route might be one of the good reasons to buy an e-bike (which everybody in Kassel except me seems to have done already). The trip is 37 kilometres long in each direction and you can do it in two to three hours depending on your speed and the number of breaks you take. You’ll end up in a nice old city with lots of half-timbered houses which is definitely worth the effort.

The best starting point of this trip is the Karlsaue. From there you can cycle along a water channel next to the river Fulda to the beer garden Neue Mühle. There you’ll have to cross the river on a bridge to get to Bergshausen. Follow the nice promenade along the river and you’ll pass the very good restaurant Fährmann (which might be a good option on the way back). After passing under the Bergshäuser Brücke (a very high motorway bridge) you need to cross the Fulda again on the Sperre-Brücke, get up the first hill and then cross the river once again over to Dennhausen.

It is a lovely route following the river. The next village is Dittershausen where you will see a fancy beer garden called Käptn Tom – you won’t stay hungry or thirsty on this route. When passing by watch out for Fullesteine – hand-painted stones that would love to travel with you. It is pretty easy to recognize that you’ve left Kassel as now people start to greet you even if you’re a foreigner – reciprocate this friendliness. After crossing the river once again and passing under a high-speed train bridge you’ll reach Guntershausen (belonging to Baunatal) where you’ll see many sheep and you’ll have to use a bridge again – which is also a grave.

On the other hand, you could go straight ahead and after two kilometres you’ll find the river mouth of the river Eder. That might be a nice diversion – and some people prefer this route because when continuing the correct path to Melsungen you’ll have to get on top of a nasty mountain and will then pass under a motorway to Guxhagen. When you go to the river mouth of the river Eder and continue straight ahead to Grifte you can turn left at a roundabout, follow the street over the rivers Eder and Fulda to Guxhagen and you’re back on track. Without climbing that damn hill. At Guxhagen you will find the Avanti beer garden but also a bakery and a kebap restaurant. Following the route, you will see the nice sinuosity of the Fulda at Büchenwerra and get over the river on a pedestrian bridge leading you to Grebenau. It is another village with too much inclination.

The next village is Körle which offers you the Wagenfurther Stuben, the next beer garden. On a short but nice cycle path, you’ll get to Lobenhausen and need to continue on a less used road to Röhrenfurth which already belongs to Melsungen. Now you need to pass again under a bridge and there is a last long loop to the city entrance of your target destination. Follow the way until you see the ancient bridge called Bartenwetzerbrücke (a ‘Bartenwetzer‘ is a woodcutter how is sharpening his axe). Directly next to it you’ll see the entrance to the historic city centre, the nice town hall and the city church.

Enjoy the nice half-timbered houses and the many restaurants and coffee bars in the city. Melsungen is mostly known in Kassel for the handball club MT Melsungen playing in the first German handball league – but they play nowadays in Kassel at the Rothenbach-Halle. You can return to Kassel by RegioTram from the station on the other side of the historic bridge (RT5 goes to Kassel-Wilhelmshöhe, Kassel Hauptbahnhof, Auestadion and the city centre). If you like to return by bike and are running out of water or need an ice cream: there is a gas station shortly before leaving the city. On your way back you should look out for the different farm shops and vending machines along the way where you can buy eggs, sausages and noodles.

If you want a little bit more of track you can continue throughout the city (did you take a look at the Schloss?) and follow the river Fulda further upstream towards Malsfeld where you can watch a nice nature protection zone. Next village is Beiseförth with a beautiful swimming lake (with facilities and a coffee bar) and directly behind – a short funicular which you have to operate with your own muscle power. Getting there means another 10 kilometres in each direction. On your way back – shortly behind the roundabout with the ‘M‘ in the style of half-timbered houses – you will find a giant supermarket with a vast range of products if you need something for your way back.