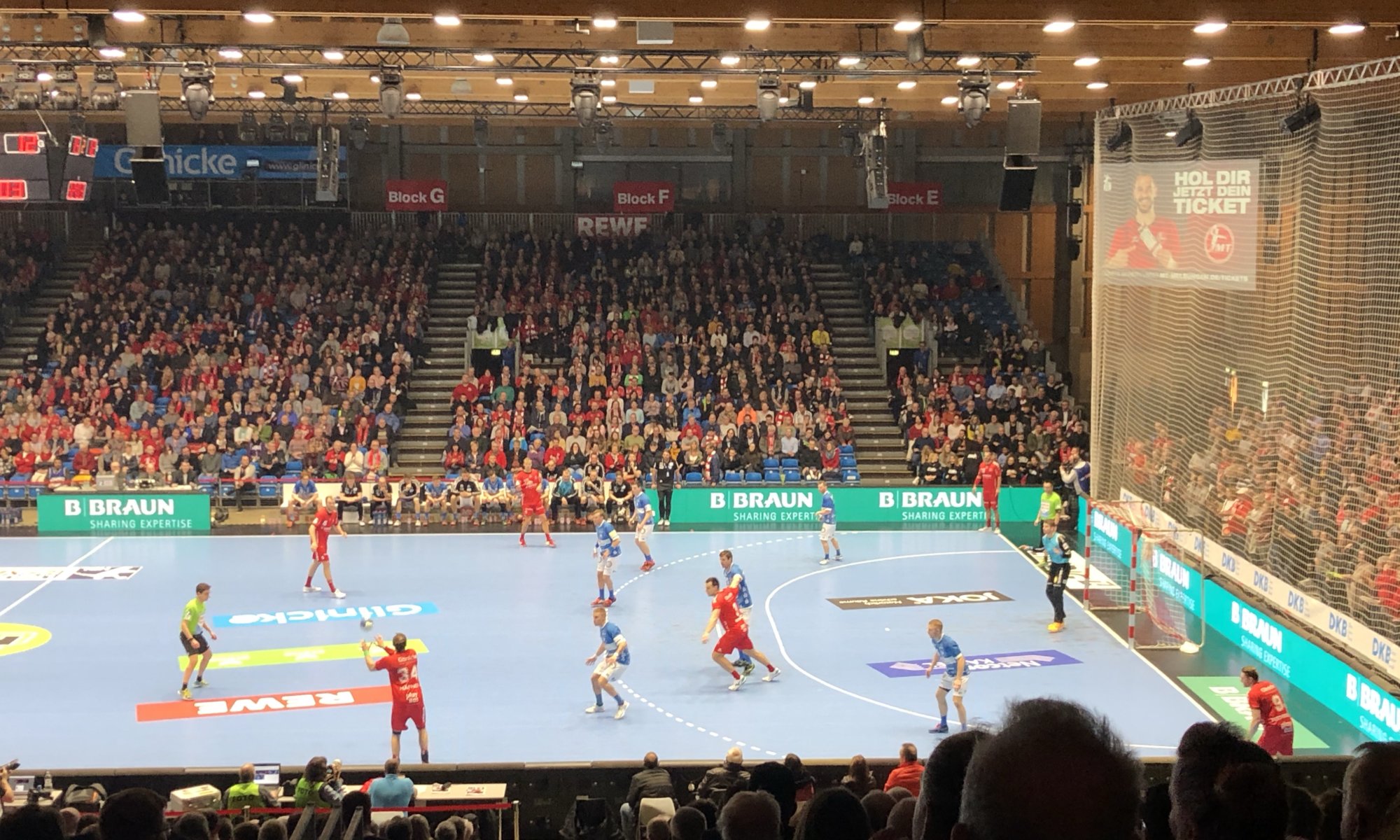 Melsungen is a small city southeast of Kassel, Germany. It is known for its half-timbered houses, big companies and the MT Melsungen, a handball team playing in the Handball-Bundesliga (HBL). The team played sometime in Rotenburg an der Fulda and has now its home in the Rothenbach-Halle at Kassel. Handball was never a team sport I was watching and therefore I had to learn some rules of it in advance.

What I really liked about my visit to the Rothenbach-Halle is that it is so hassle-free. You can buy tickets online and put them in your digital wallet. Entrance is fast, there is no security check and you can move around freely. Okay, everything looks a little bit improvised – the arena on the fairgrounds, the stands look like temporary installations; but that is pretty normal. Everybody is very polite, the crowd welcomes the away team and the players excuse themselves after a foul. The spectators are of all ages, it is a very mixed group of humans and you can even go here in a suit (everywhere else you would look silly like that). There is some dancing as entertainment in breaks and the people make use of what Germans would call Klatschpappen – clap banners that I really dislike.

Handball is sometimes a very static game; the defending team places itself around their goal and the attackers pass the ball around – then everybody moves to the other side of the field. Only a few times real action occurs in the centre of the field. And there are a lot of goals during the 60 minutes; that is nice but each of them doesn’t really feel like a highlight. I watched a match of the MT Melsungen against the Bergischer HC, a team from Wuppertal and Solingen (an area called Bergisches Land), Germany. Melsungen had just fired their head coach some days before and no one knew what would happen. In the end, it was a nice and safe 28:25 (15:12) victory.

Handball is played with six outfield players and a goalkeeper per team. A match lasts 60 minutes separated into two halves of 30 minutes each (with a break of typically 15 minutes in between). The clock is stopped during timeouts and after fouls – expect a match to take 1:45 h from start to end. The winner is who achieves to throw the ball by hand into the goal of the opponent more often. The field used is 40×20 metres large and divided into different zones around the goal: six metres around the goal is the goal area, the goalkeeper is only allowed to leave his goal for four metres. In a distance of nine metres around the goal, there is the free-throw line. Penalty shots are done from a distance of seven metres. The lines itself are always part of the area – as you are not allowed to throw the ball on the goal from within the goal area stepping onto the line is already not allowed.

The goals have a size of 3×2 metres. Outfield players are not allowed to enter the goal area but can jump into it: the ball has to have left the hand before the player touches the ground. Also, defending players are not allowed to enter the goal area. Exchanging players is allowed anytime. Teams can take a timeout lasting for one minute three times a match – but only if they are in possession of the ball. Handball is a contact sport and you are allowed to touch other players and block them. Pushing or holding a player is sanctioned by a free-throw (nine metres away) or, if a chance to score was destroyed, a seven-metre-throw. Additionally, the player might see a yellow card. After three yellow cards against a team (not a specific player) a player is sent off for two minutes. If he protests against this he gets another two minutes off. Rude behaviour can cause a red card which means disqualification for a player and his team playing for two minutes with one player less – afterwards the team can send a replacement.

Officially the club referred to as MT Melsungen is the Melsunger Turngemeinde 1861 e.V. – founded in 1861 and organising teams for many different sports. But in handball the club is most successful: since 1992 the was playing in the second league and since 2005 it is part of the first German league – the Handball-Bundesliga (HBL). Since 2014 it was different times also part of the EHF Europa Pokal, a cup leading to matches across Europe. Getting to the first German league was the greatest success of the team, it didn’t win a championship or a cup so far. The team plays in red and white and has a mascot: Henner (the version of the German prename ‘Heiner‘ used in northern Hesse), a red dragon. The club asked its supporters for suggestions and as the slogan at that time was ‘to be on fire for MT‘ a dragon was a good choice.

The Rothenbach-Halle is a multifunctional arena located at the fair and exhibition centre in the southeast of Kassel, near the Bugasee. It was opened in 2007 and for handball matches, it can host up to 4,300 spectators. At first, the arena was only supposed to be used once against the team THW Kiel – but as the tickets were sold out pretty fast MT Melsungen decided to have all home matches here. You can reach the Rothenbach-Halle most easily by car and there is enough space to park your car. Reaching it on foot is rather bad as the arena is separated from the city by the Bugasee and the Karlsaue. Getting there by bus is also not easy – you need to go to Auestadion (by bus, tramway or RegioTram) and find one of the shuttle buses starting two hours before a match. The result is an endless queue of cars before and after matches.