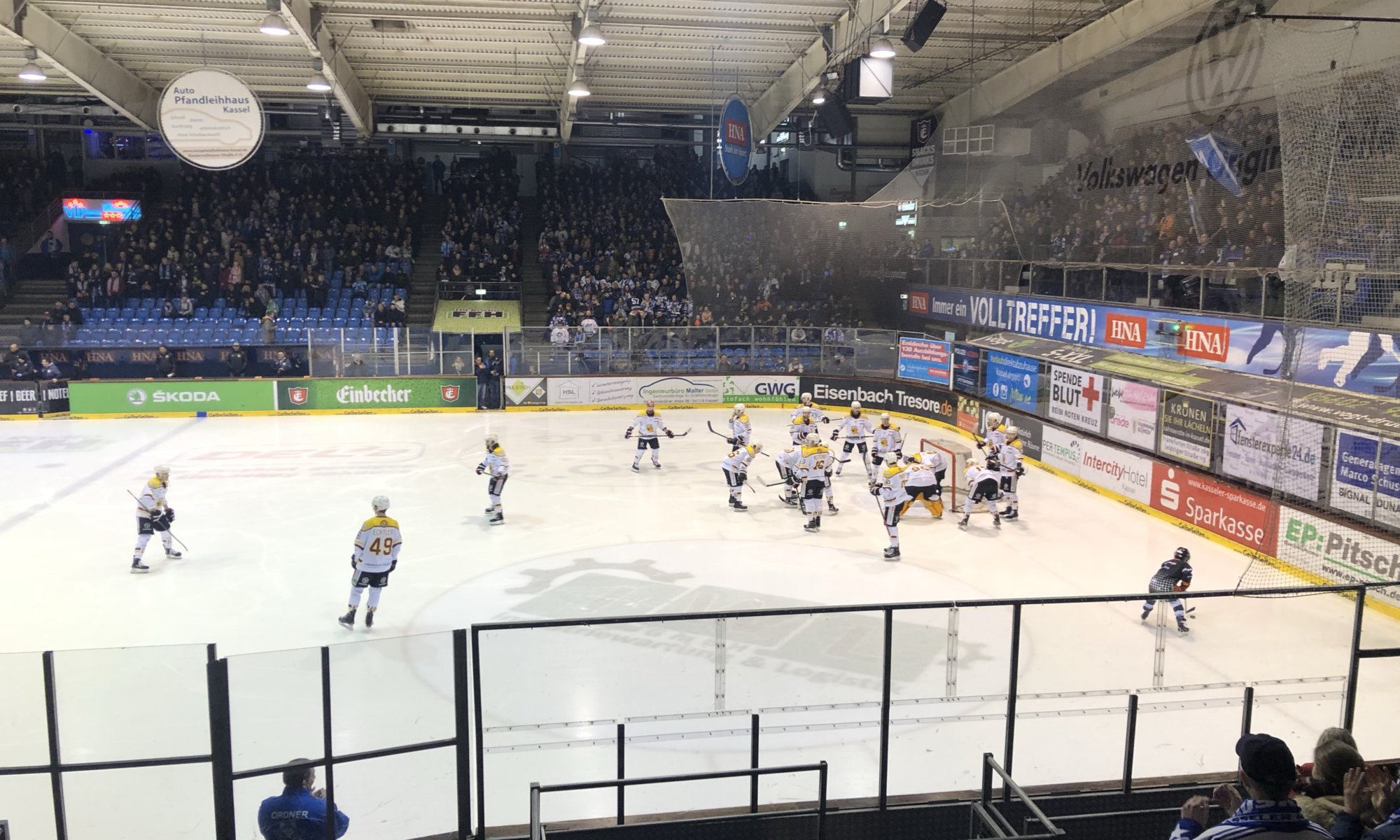 For me, it is the first time that I’m living in a city with an ice hockey team. I’ve never seen a match so far but I had the feeling that as an inhabitant of Kassel, Germany, you should have at least once seen a match of the Kassel Huskies. As a soccer aficionado, I had to prepare well to somehow understand the very different rules. And I didn‘t regret getting to the Eissporthalle after seeing a great 6:3 (3:0, 3:3) victory against the ESV Kaufbeuren.

My visit to the world of ice hockey (and too large jerseys) was a pleasant one. That already starts with the stadium where you can move freely within after passing a simple security and ticket check. You don’t have to remain in your section, nobody wants to see your ticket once your inside. The atmosphere is relaxed – but as my company was once a sponsor of the team I could see the logo very often on the back of jerseys (it was surprisingly easy to ignore that after a long working day).

In the beginning, the light is turned down and the crowd is singing You’ll never walk alone by Gerry & The Pacemakers – a song that I connect to soccer but that is nowadays used quite ubiquitous. If the team scores Rama Lama Ding Dong by Rocky Sharpe & The Replays is played (in my head bound to the VfL Wolfsburg and to bad memories).

The match of the Huskies against the ESV Kaufbeuren caught me emotionally. After a very good first third (3:0) the team played a bad second part (3:3) with some rather stupid mistakes. In the last part, they received two penalties at the same time (4 minutes and 2 minutes) and had to play with only three fielders (against five). In this situation and under high pressure they managed to score the 5:3 and decide the game. Amazing!

It sounds very simple: the target is to get a tiny hockey puck into the goal of the opponent. But that doesn’t happen too often during a match. Ice hockey teams often have up to 22 players but during a match, only five of them plus a goalkeeper are allowed on the field. Interestingly an ice hockey field is approximately 60 x 30 meters large – there are no absolute definitions, rather a range for the allowed size of the field. A match is 60 minutes long and split into three sections each 20 minutes long. Breaks in between are 18 minutes long. As the clock is stopped very often a match lasts about 2 to 2.5 hours.

Ice hockey became famous after the invention of artificial skating rinks since the beginning of the 20th century. It is most famous in the United States, Canada and the former parts of the Soviet Union. Ice hockey is a very fast sport with a lot of body contact between the players. As the hockey puck can get very fast you’ll see transparent plastic discs or nets in front of the spectators – feels a little bit strange to me but it is necessary. Nevertheless, the puck once flew over the fence into the crowd of spectators. At the centre of the field, you will see the bully point through which a red line is leading. Additionally, there are two blue lines creating a neutral zone in the centre.

Players can be exchanged every time (and that happens very often) – but there is a penalty if too many players are on the field. In contrast to soccer, there are no own goals, a goal is accounted to the last player of the scoring team that touched the hockey puck. At ice hockey, there are two kinds of offside (caused by the fact that you are allowed to pass behind a goal) and the so-called icing – a not allowed shot from far away. Teams are allowed to take a 30 seconds timeout once every match.

Penalties seem to be very complicated in ice hockey. There is a long list of things you are not allowed to do like elbow checks or raising your stick to high. And there is also a wide variety of penalties like reducing the number of players on the field for two or four minutes, disallowing a specific player on the field for ten minutes, suspending a player for the next match or a penalty kick. And to make it even more complex there are some more special rules:

Nevertheless, it is quite easy to follow a match even if you‘re a newbie.

Ice hockey is played at Kassel since 1967. The club was by that time called Eissport-Gemeinschaft Kassel (ESG), since 1987 it was the Eissport-Club Kassel (EC Kassel). The season 2010/2011 was the last season that a team from Kassel was playing at the first German league (DEL) – insolvency led to closing down the team. Only an amateur team could start in a much lower league but fortunately already since 2014 Kassel is at least again present in the second league (DEL2).

But the Kassel Huskies are still far away from the good old days of ice hockey at the city. The two best results were in 1997 the second place in DEL and in 2004 the second place in the ice hockey cup. The supporters of the Huskies maintain a rivalry with the Frankfurt Lions making matches with them really hot games. During matches, there is also a mascot, a Siberian husky called Herkules, entertaining the crowd. Probably a student is inside this costume and I wouldn’t want to switch with him or her during hot summer days. 😉

The Eissporthalle was opened in 1977 and has space for 6,100 visitors. This includes not only seats but also stands in an area called ‘Heuboden‘ (hayloft). It’s the place for the most active supporters leading the crowd. Getting something to eat or drink is simple and fast (but the food is also rather basic) – there is a shop at the main entrance and also on the first floor.

The Eissporthalle is located next to the Auestadion soccer stadium and you can easily reach it with tramway 5 and 6 or RegioTram 5 (and different busses). If there is no match ongoing the hall can be used by school classes at workdays and by everyone on weekends (there is also a special disco every Saturday evening). I’ve been working now at Kassel for eight years and none of my colleagues ever told me that he is going ice skating there. When I was a child living at Göttingen close-by we always drove to Braunlage in the Harz mountains for ice skating – that there is also the opportunity for that at Kassel was unknown to us.