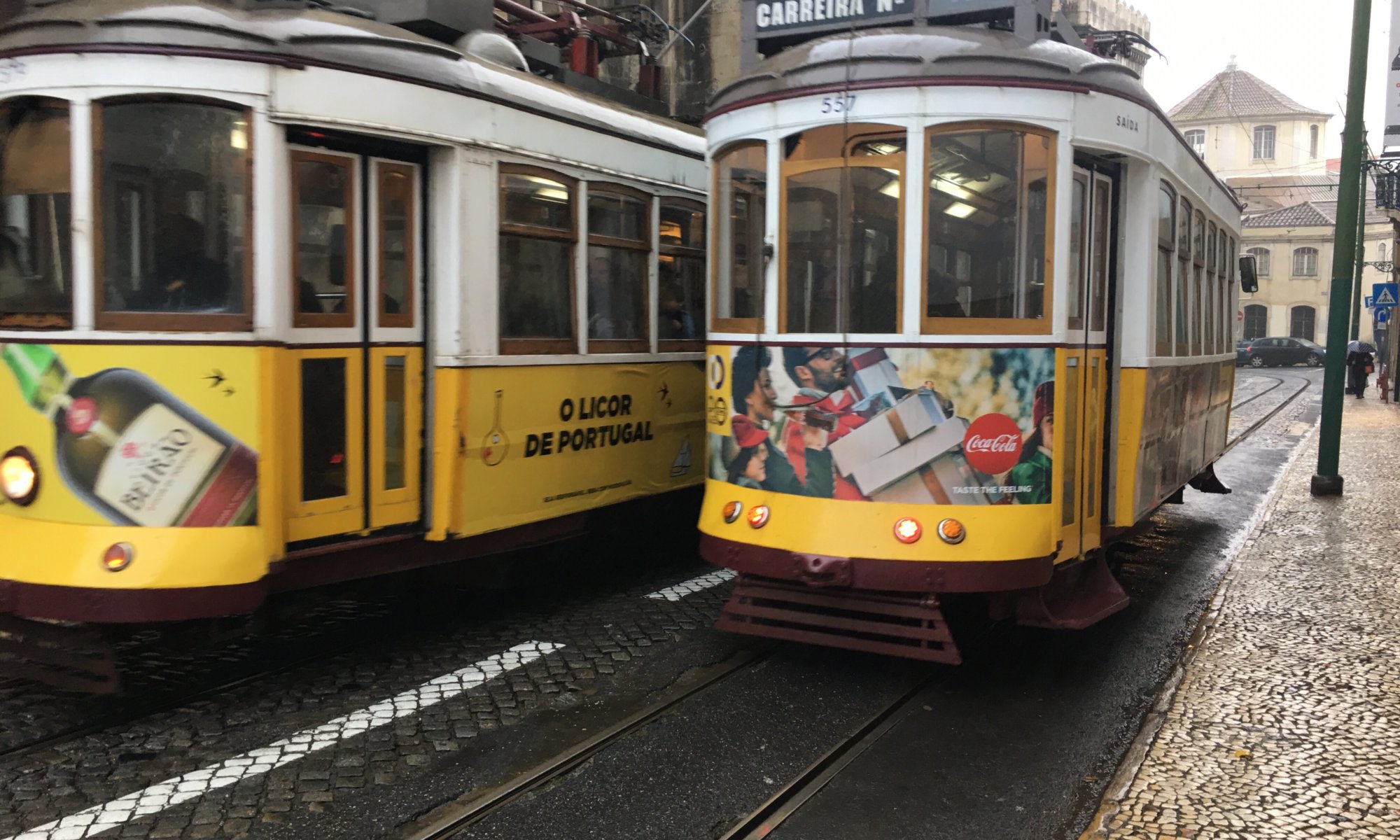 I avoided to go to Lisboa, Portugal for several years. Not that I had bad feelings about the country – it was just that so many people I know travelled there and I was searching for places less known. But after I went to Brazil and found out that Portuguese is one of the best sounding languages and after I visited a Portuguese town (Paraty, Brazil) there I developed the desire to see the capital of this country.

As we had a lot of trouble with flights during the last 365 days (on the trips to London and Edinburgh) we decided to be back earlier as necessary and only had two full days at Lisboa. That wasn’t really enough for this city but we packed it with as much as possible. And our feet were burning after that trip. But it totally was worth the effort.

We landed at the Aeroporto Humberto Delgado in the afternoon and I had the first big surprise: my smartphone connected automatically to the mobile phone network and fetched my e-mails and other messages. My first experience with the new Europe-wide free roaming – long live the European Union! 😉

We took a taxi to the beautiful Memmo Alfama Hotel directly in the city quarter Alfama – the old heart of the city. It is located in a backstreet and a bit hard to find. Getting there lasted a bit longer than expected as our driver took the route through Alfama and we got stuck behind the well-known Eléctrico 28.

On our first evening we took a look at the Catedral Sé Patriarcal close to the hotel and walked on foot from Baixa to Chiado. In the uptown we came by incident across the Convento do Carmo which we already had seen from Rossio. We decided to visit the old church and the attached archeological museum and weren’t disappointed.

We were on our way to the Miradouro de São Pedro de Alcântara, high above the city center and with great views – even though some parts of the terrace are closed due to deterioration. At the miradouro we found a Christmas market where we could have some tapas, buy some artwork and needed to decide whether to have our sangria with muscatella (wine) or ginja (a Portuguese liquor).

We continued our way by walking down to the Praça do Comércio and looked at the  Arco da Rua Augusta, the high electric Christmas tree and river Tejo. From there we took a streetcar to Cais to Sodré expecting to find some restaurants there. In the end we decided to eat at the simple but good Cervejaria Portugalia, where we found friendly staff and got to know Caipirão – a Caipirinha variation made with the famous Portuguese liquor Beirão.

The next day started with a highlight: As we wanted to avoid long queues we first went to the Elevador de Santa Justa (which we could use as the only passengers in the morning) and had nice views from the top. Then we walked to the Igreja de São Roque which is really beautiful, but you wouldn’t expect it from the outside. With the Elevador da Glória we returned to downtown and searched for a bus taking us up to the Castelo de São Jorge.

The ride to the castle in a minibus is already an experience. When you arrived up there and bought a ticket you can first enjoy wonderful views on the city and river Tejo from a wide viewing platform. The castle itself consists mostly of its walls on which you can walk. After walk around and climbing all towers we continued on foot to the further sights in Alfama; beginning with the Miradouro Santa Luzia.

The to my opinion most beautiful church has never been used as one – the Panteão nacional is not only interesting because of the important people buried here and it’s architecture – it also has a nice terrace with good views on Alfama and the Tejo. From there we continued by bus to the Museu Nacional do Azulejo exhibiting art works on tiles. What sounds a bit boring is actually a nice place including the cloister Madre de Deus.

Then we changed the city quarter and enjoyed some art and especially great modern and contemporary art at the Museu Calouste Gulbenkian. After a short stop at the Linha d‘áqua in the Parque Eduardo VII we had a surf’n’turf dinner at the Mercado da Ribeira. And as this market hall is so crowded we ended our day at a nice and relaxed bar close by – the Stupido.

We had kept all important sights in Belém for our last day and started at the Torre de Belém which is obviously not built to welcome so many visitors. It was good to be there early and afterwards we went to the Padrão dos Descobrimentos and the great Mosteiro dos Jerónimos. There we had to wait for an hour to enter – the longest waiting time during our whole trip. We enjoyed the fantastic architecture and learned about the origin of the Pastel de nata but didn’t buy some at the shop Pasteis de Belém because it looked so crowded.

After enjoying some art at the modern Museu Coleção Berardo close to the Mosteiro we went by train to the east of Lisboa. From the railway station Oriente we walked to the Oceanário de Lisboa which contains the largest fish tank in Europe. We explored the Parque das Nações and had a look at the Teleférico de Lisboa and the Torre Vasco da Gama.

After a simple dinner in Baixa we had to prepare to leave on the next morning. Being at Lisboa was great but we simply had not enough time to see everything. Getting around in Lisboa, was pretty simple (using a smartphone) even though there are so many means of transport. If the Lisboa Card really was worth the money I cannot say, but it made life easier.