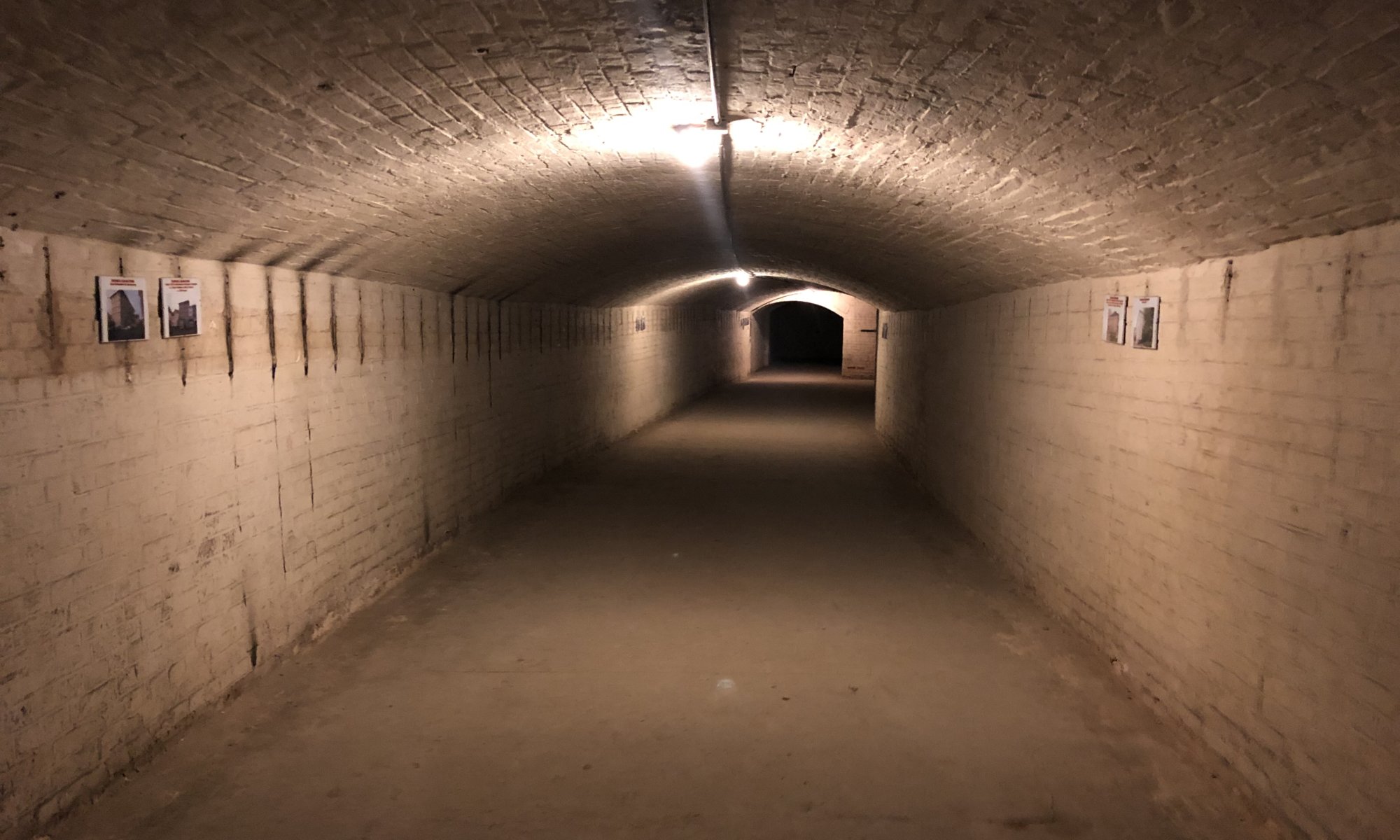 Because of its massive weaponry production the city of Kassel, Germany was a primary target for air raids in World War II. Therefore you can still today find different bunkers under the city and above ground. One of them is the vast Weinbergbunker within the Weinberg mountain (where once wine was planted) close to the city center. It was created in 1821 to store and cool beer – the temperature down there is always between 8 and 11 degrees celsius. In addition in winter times ice from the frozen river Fulda was brought there.

Different breweries used this place for storage and on top of the mountain beergardens were created. In World War II the bunker was stabilized, extended and prepared to take in many people during different air raids over time. The heaviest one was on October 22nd, 1943: on this day 569 British bombers took the route to Kassel. Because of feint attacks on Dortmund and Köln the air raid alarm was started late. The centre of the attack was the church St. Martin that was marked with light bombs (a system called ‘Christbäume‘, christmas trees).

In a second wave bombs cracked open windows, doors and roofs of houses before in a third wave 420000 incendiary weapons were dropped. This created a firestorm which was 1200 degrees Celsius hot and destroyed 97 percent of the city centre, 7000 persons died. Within the Weinbergbunker 10000 personen searched for shelter. As the air ventilation was not designed for so many people some died because of anoxia. But this could have been much worse: the firestorm in the city created an airflow in the bunker. Without it much more people would have died. Life and death were close, within the Weinbergbunker also 40 babies were born.

The entrances to the bunker are in the direction of the Frankfurter Straße and are clearly visible from the street. In addition there was an entrance from the Henschel villa on the Weinberg which has been torn down later – now the Grimmwelt is standing there. The bunker couldn’t be finalized during the war and one section is still in the condition when it was used to cool beer. Even the ice storage is preserved. During the dOCUMENTA (13) in 2012 the bunker was also used to exhibit art. The organizers had to create a 300 pages long security concept to get approval. Only 15 persons at a time were allowed to enter a small section of the bunker – waiting times were typically 3.5 hours.

That having more persons in such a bunker can a be a problem was already proven in 1992. Four guys decided to organize a large techno party within the bunker. Over weeks they brought equipment and drinks into the bunker system. Using flyers they promoted their party and 600 persons went into the mountain. As the patients of a hospital on the Weinberg couldn’t sleep because of loud music the police and the fire fighters were called – which probably saved a lot of lifes. The electric system had a short-circuit fault, candles melted electric cables and the bunker was full of smoke. The four organizers were arrested and convicted to a suspended sentence.

The bunker system was preserved over different decades. Today the bunkers in the city are continuously given up as they are no sufficient protection anymore. Modern weapons can crack ten meters thick ferroconcrete. In 2008 the fire fighters association of Kassel started to have tours through the bunker. It has three floors but the middle section is the biggest one and the only one easily accessible. It is 1.6 kilometers long and during the tour you can walk for one kilometer under ground. The tour lasts two hours and costs five Euros per person. Public tours are always on the first Monday of the month but groups can request individual tours.