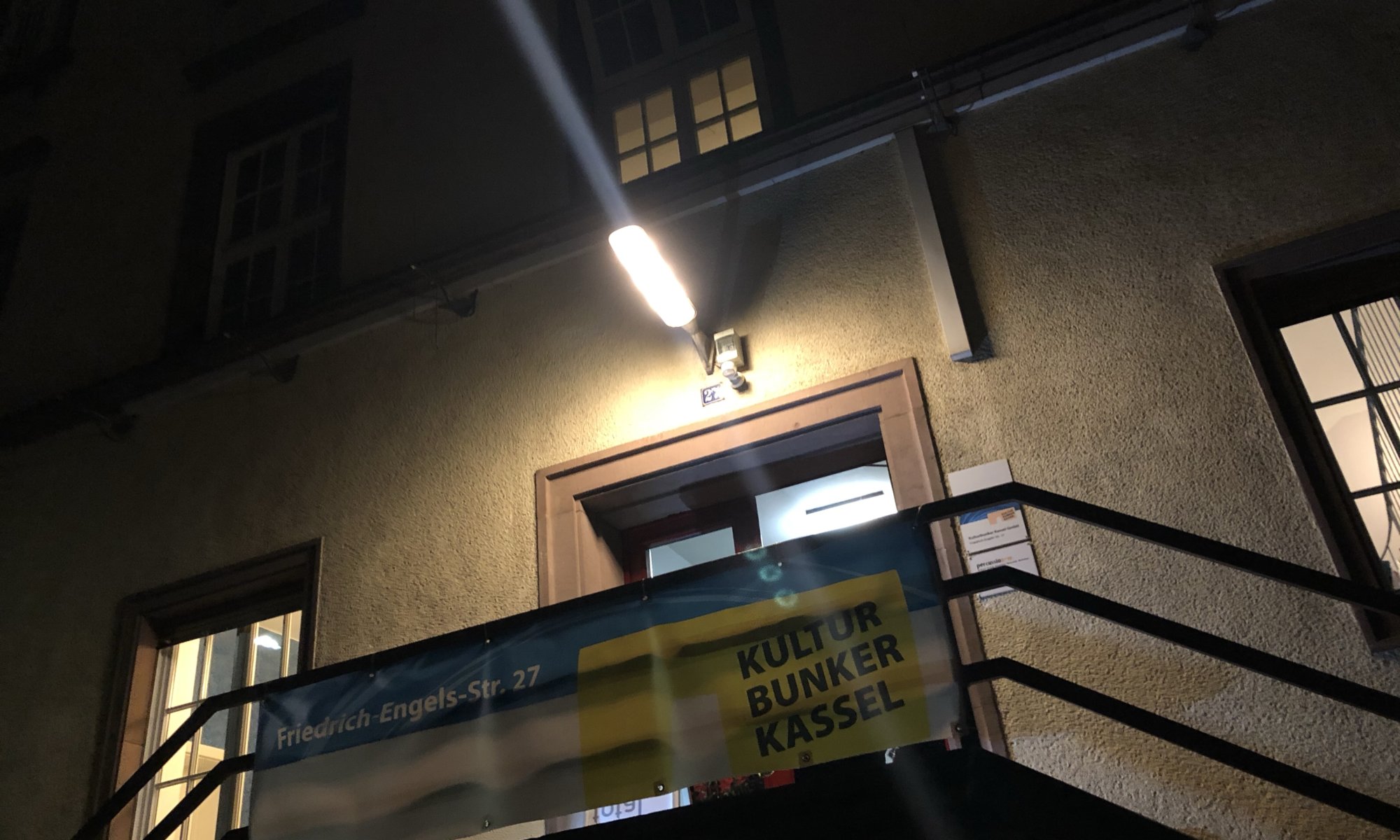 Sometimes you don’t have to travel far to find interesting places. And sometimes they are hidden just around the corner and you’ve passed them many times without noticing. I had this experience with two air-raid shelters (in German often called ‚bunker‘) and a beer-cooling cellar north of the city centre of Kassel, Germany. In the city quarter ‘Vorderer Westen‘ you can find a mountain called Kratzenberg consisting of shell limestone. During the time of the dinosaurs, the area was under water and the remains of shellfish sank down and created this limestone. Within this material many breweries created cellars later.

Some of these cellars have later been converted into air-raid shelters. But in this part of Kassel you can also find hidden overground multi-storey air-raid shelters – if you know where to search. Fortunately, there are the ViKoNauten, a private association trying to make historical places open again and to tell their stories. A mission that is quite hard as Kassel has been destroyed in World War II to large extent. In the list of most-destroyed cities, it comes second directly after Dresden; that is mostly because of the massive weaponry production (still active today). On a guided tour you can visit three places: the Reichsbahnbunker, the Felsenkeller Roßteuscher and the Luftschutzstollen Viktoriabunker. You need to buy tickets in advance and they are typically sold out a long time in advance.

The German railway was important for World War II – for the transportation of soldiers and weaponry but also for the cruel deportation of Jewish citizens. Kassel is located in the center of Germany and had a Reichsbahndirektion, an administrational unit of the railway organization of the Deutsches Reich (‘Reichsbahn‘). The building is still today standing in Kölnische Straße and is used by the successor of Reichsbahn, the Deutsche Bahn. It is quite impressive but you might not recognize it while passing by – but if you look at the rich ornaments you will see typical symbols of railways like the iron wheel with wings.

Today the air-raid shelter is used for bands and music schools – the thick walls help to save the neighbours. It is called ‘Kulturbunker‘ and you can access it easily. Only the lower rooms which are preserved in its original state are closed and only accessible during tours. You can find it in Friedrich-Engels-Straße close to the Kölnische Straße (next to the red gas station).

Just across the road, you can then see some ancient walls and an unobtrusive entrance that is always closed. If you get there on a tour a long staircase with old and rounded stairs leads you down to a cellar formerly used to store beer: the Felsenkeller Roßteuscher. It is a good example for the many places in this region of the town that served that purpose. For cooling beer you need a permanent temperature of 3 to 5 degrees celsius. To achieve this temperature the cellar has a vertical chute that you can also see from the street level. In winter times ice was taken from river Fulda or from lakes and put into the chute. If there wasn’t ice then snow was compressed – that helped to keep the cellar cool enough for the complete year.

The Felsenkeller Roßteuscher exists since 1950 and is in its original state. The only thing looking a bit strange are a large number of preserving jars with strange texts on it and unidentifiable content inside. In the past, the organization building roads and motorways was located above the cellar. When constructing the motorway A7 (from North to South) and the A44 (from Kassel to Leipzig) they had to store soil samples. When the state organization moved out they simply ‘forgot’ these samples in the underground.

The air-raid shelter Viktoriabunker was one of those open to the public which meant to Germans only and which additionally excluded Jewish citizens. Throughout the city there were only air-raid shelters for 5 % of the inhabitants. The air-raid shelter is called Viktoriabunker as it is located next to the Bürgermeister-Brunner-Straße which was called Viktoriastraße by that time. You can find it easily as today there are nice paintings and decorations on the outside of the building. When entering a long staircase winds down and you will find yourself in an ancient gas lock.

The air-raid shelter was seperated into a public part and a private part belonging to a landlord. It is quite long and leads you even under the school Engelsburg located on the other side of the street. Formerly used as a cellar to cool goods it was converted into an air-raid shelter. In 2015 the entrance was blocked as a result of construction works on the building above. You can still today see a hugh amount of concrete that ran by incident into the cellar. Fortunately, another entrance was found.

If you want to take part in such a tour, check the website of the ViKoNauten. Tours are only available in German and sold out typically a long time in advance. Unfortunately, you are not allowed to take pictures on these tours. I can also recommend their tour around the Martinsplatz in the city center – including some very interesting hidden gems. Another air-raid shelter that is accessible today is the Weinbergbunker; an impressive place that is kept open by the firefighters association of Kassel.