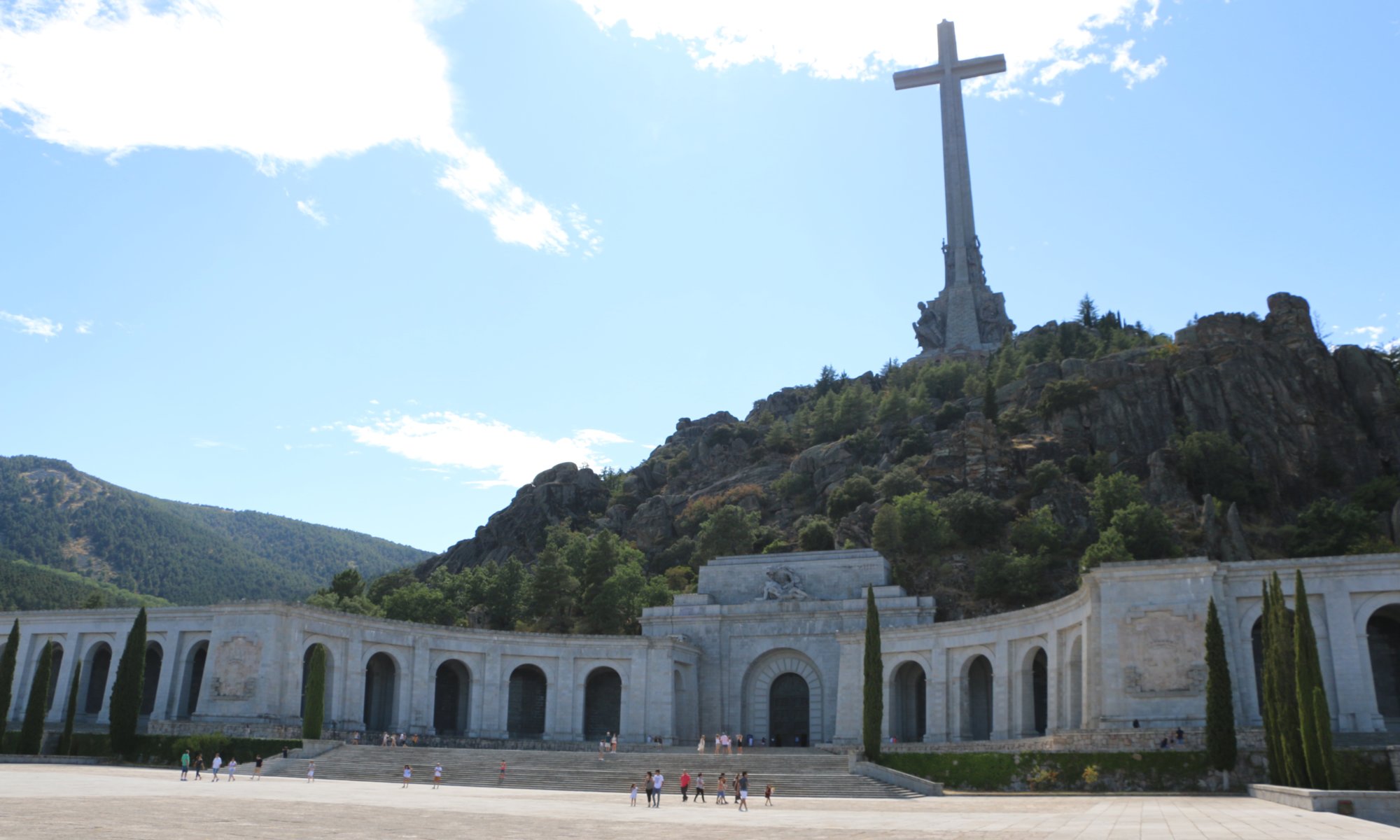 When Francisco Franco won the Spanish civil war (1936-1939) with the help of Adolf Hitler and Benito Mussolini he early started to preserve his heritage. As the Spanish kings and queens are all buried at the El Escorial in the Sierra de Guadarrama he wanted to have his own grave there, too. Already in 1940 the construction works started and mostly political prisoners had to dig a vast catholic cathedral into the mountains of the Valle de los Caídos. It is in fact bigger than St. Peter in Roma, Italy and had to be shortened by defining the entrance as not part of the church.

On top of the cathedral hill you can see a huge cross which is 152 meters high and 46 meters wide. Together with the cathedral it is as high as the Tour Eiffel at Paris, France. A cable car once brought tourists up to the top but the movement was a problem for the fragile cathedral and the system was abandoned. I arrived at this place with a tourist group consisting mostly of Spanish travellers. I wanted to hear how the locals explain this plain. My tour guide introduced the monument as a memorial for all victims of the Spanish civil war and that the remains of nationalist/fascist soldiers as well as of republican victims are buried here. It’s not a lie. But a huge twist.

The monument and church was built by Franco for his soldiers only and to glorify his dictatorship. The mortal remains of more than 30 000 people are located in the church. And the catholic church (who was an ally of the fascist dictator) tries to move the bones of republican soldiers from mass graves into the monument to wash their hands clean. But it is only a tiny fraction of bones that belong to republicans. When you’re standing in front of the church you can see a vast plateau that gives very good views on the valley. Already this place is monumental and impressive. When looking at the church you see fascist architecture built to impress.

The side buildings carry the fasces, the bundled arrows – the most important symbol of Spanish fascism and the fascist Falange party. When entering the church you have to go through a security check; for a good reason. And then you see two giant angels leaning on swords. The were created out of the cannons of the republican soldiers. Then a very long tunnel follows and on both sides you see memorials for the units of the Spanish military that served Franco. And it begins for sure with Francos own unit, the african corps. Behind the carpets on the walls the mortal remains are stored.

When you reach the altar at which the catholic church regularly worships God you will see a memorial in front of it and flowers on it. The name says ‘José Antonio‘ and I wanted to search on the Internet who he was but that is impossible when you are in a cathedral within a rock. But my tour guide who avoided any political remark gave me his full name José Antonio Primo de Rivera. The former leader of the fascist Falange party. Buried in front of the alter of a catholic church. And people are putting flowers on his grave. But it is getting even worse.

When you walk around the altar you will see another memorial on the ground and you can immediatly understand why several guards watch you while visiting it. It is the grave of fascist leader Francisco Franco. With even more flowers on it. Imagine Adolf Hitler being buried in an active catholic church he designed for himself and his followers are still putting flowers on his grave. For a German this is unimaginable and it was the first time I started a very emotional political debate in a catholic cathedral.

In 1999 an antifascist group brought a bomb here and placed it in between the two graves. That explains the higher security precautions applied today. There are several discussions on how to use and change this memorial. In 2018 the left-wing government announce to remove the remains of Franco from this place but they were stopped by a court that Francos family called. I think this place will never be a memorial for all victims of the Spanish civil war. But removing the fascist leader is the minimum that should be done.