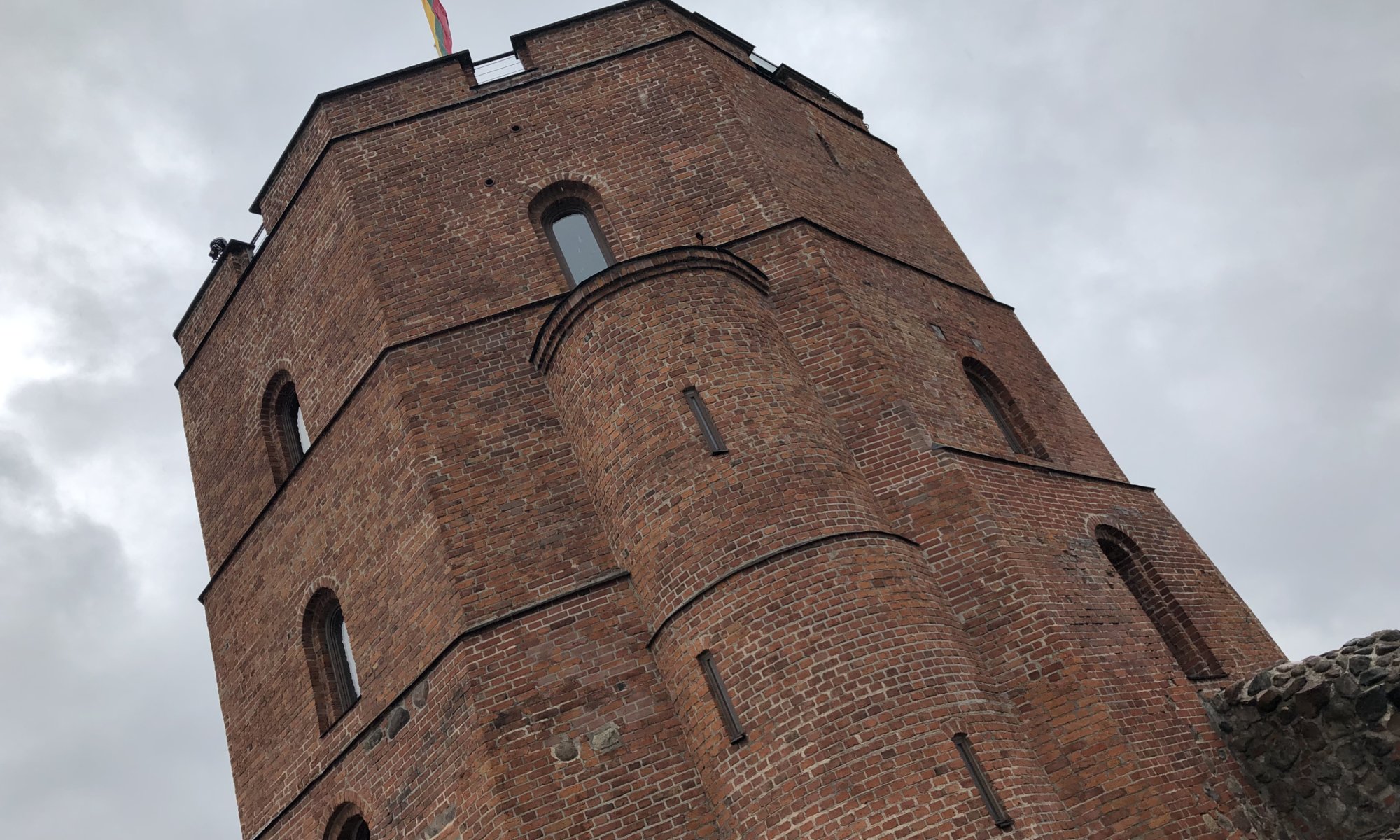 Vilnius is with more than 570.000 inhabitants the biggest city and the capital city of Lithuania. It is beautifully located on different hills and next to two rivers (Neris, Vilnia – giving the city its name). The city contains many baroque style buildings of Italian original and it contains more than 50 churches. That’s why it is sometimes called the ‘Rome of the East‘. A legend says that Grand Duke Gediminas dreamt of an iron wolf that howled extremely loud while he was sleeping on a hill next to the confluence of rivers Neris and Vilnia.

His priest told him what his dream meant: that he should build an fortress (strong as iron!) on that hill and that he should create the capital city of Lithuania there. At least you can today visit the famous Gediminas tower on that hill. And underneath you will find the cathedral square, the palace of the Grand Dukes (which looks too modern) and the national museum. This area is the center of the city – but it’s worth to explore other city quarters, too – like the artists quarter Užupis which declared to be an own state with a wonderful constituation (and 200 ambassadors around the world).

I was surprised by the fantastic white stucco of the St. Peter and Paul church and depressed after visiting the occupation and freedom museum including the jail that was used by KGB and Gestapo. Luckily I got to know before that not far away there is a cat café in gedimino prospektas with 15 lovely cats. I visited the railway exhibition next to the main railway station checked out the MO museum, the contemporary art centre and the museum of illusions.

A longer bus ride brought me to the nice TV tower of the city where you can have a drink or a meal on a rotating platform. I visited the memorial for the longest humain chain in history (for the Baltic way) and as I celebrated my birthday in the city I went to the sky bar within the hotel Lietuva and enjoyed some good views on the city and some very good cocktails. At Vilnius there is not only one single highlight – the highlight is the complete city with its wonderful buildings (and that is why it has been declared UNESCO world heritage in 1994). A charming place to be!

First findings near the city date back to the 4th and 2nd century BCE. A first wooden fortification existed since the 10th century CE and the city was first officially named in 1323 when Grand Duke Gediminas invited craftsmen, scientiests and merchants to settle at Vilnius. He offered also freedom of religion and the city was therefore attacked many, many times by the Teutonic Order. Lithuania forged an alliance with Poland and was occupied by Russian and later Swedish forces. When Poland was divided for the third time Vilnius became part of the Russian Empire.

In 1915 the Germans occupied Lithuania until 1918 and founded the state of Lithuania that was later occupied by the Soviet union and Poland. In 1922 Poland officially annexed the Vilnius region and Kaunas became capital of Lithuania for 19 years. In 1939 the Soviet union attacked Poland and gave Vilnius back to Lithuania – but in 1940 Lithuania was occupied and made part of the Soviet union. A storyline that you can only hardly follow… From 1941 to 1944 Nazi Germany took over power, in 1944 the Soviets came back and stayed until 1990. With this history of occupation, annexation and division one can totally understand while independence is so important for Lithuanians and why you can see Lithuanian flags everywhere.