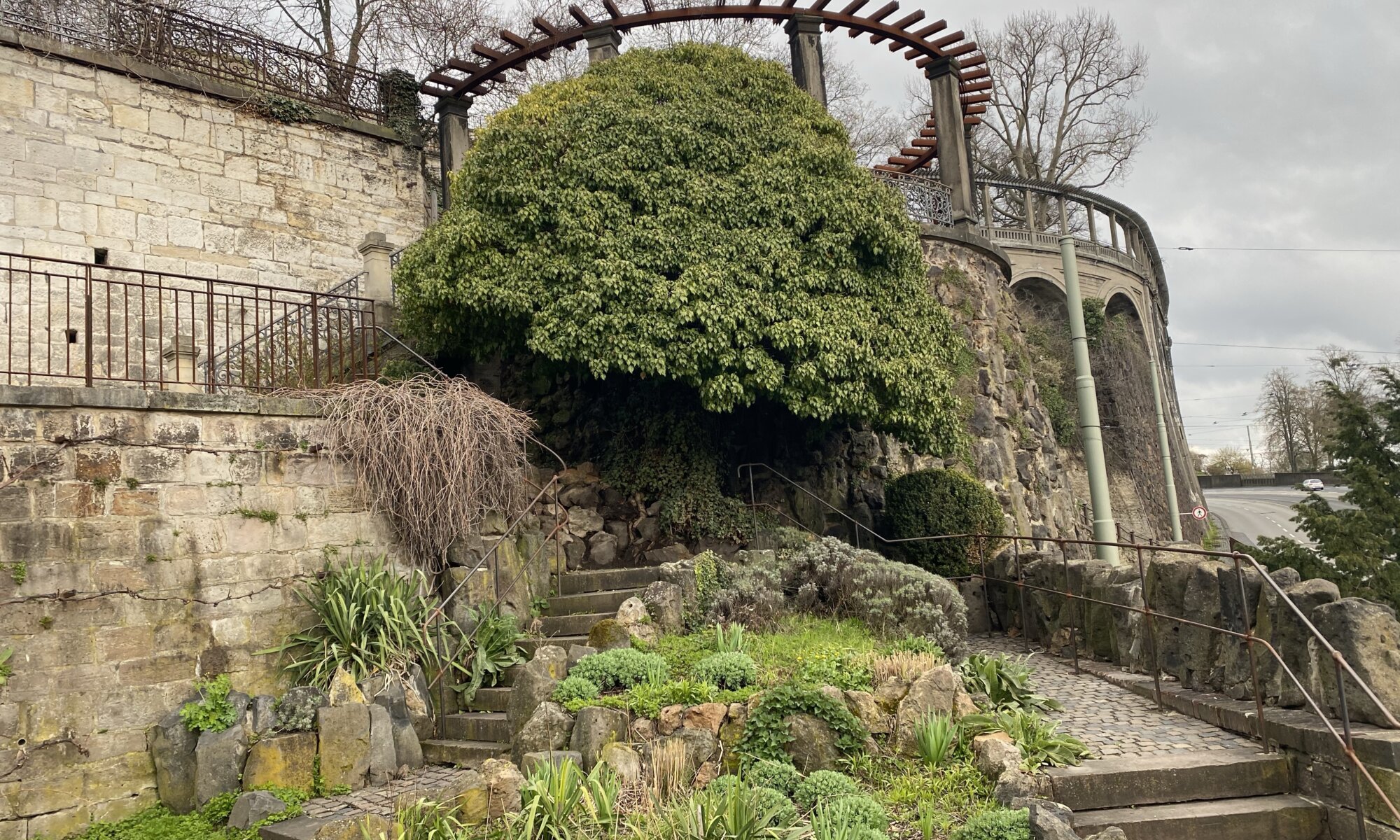 The Weinberg is a special place in Kassel, Germany – it is a little bit aside from the city centre and you would not simply see it by accident. On the other hand, it should be on the list of every visitor because on top you’ll find the Grimmwelt museum and the Sepulkralkultur museum which are both highly recommended. The limestone mountain itself has a long a changeful history: as the place where the Huguenots settled when fleeing from France, as a place for growing wine and people drinking lots of beer outdoor, as the home of factory-owning family Henschel and as the mountain containing the Weinbergbunker in which a lot of people survived air-raids and later illegal techno parties happened.

A place I rather ignored so far are the Weinbergterrassen; terraces at the southern side of the mountain. By different staircases, you can climb from level to level and enjoy different plants growing, sit down and relax. The terraces are accessible from the upper area through a gate next to the Grimmwelt and from below where the streets Am Weinberg and the large Frankfurter Straße meet.

What we see there today is strongly connected to family Henschel who earned so much money with their factories that they could step by step buy the mountain. In 1868 the first villa was built by Sophie and Oscar Henschel and close to it a garden in form of terraces was created. In 1902 Karl Henschel added his villa to the ensemble and the round-shaped upper part towards the southeast was built. After World War II the area was sold to the city of Kassel in 1959.

I must admit I only took a closer look at the Weinbergterrassen because I was asked what the strange ruin in that area is – mostly made of ferroconcrete and with chimneys. And it is almost impossible to guess the answer correctly. Only when you look at historical photographs you can understand that this rather ugly ruin once was the greenhouse of the gardens. It was built between 1870 and 1920 as the first building in Kassel made of ferroconcrete. In better days the outside was decorated with shell limestone. In 2016 it was planned to revitalize the building by creating a gardening museum inside – a fantastic idea that unfortunately couldn’t be realized so far.