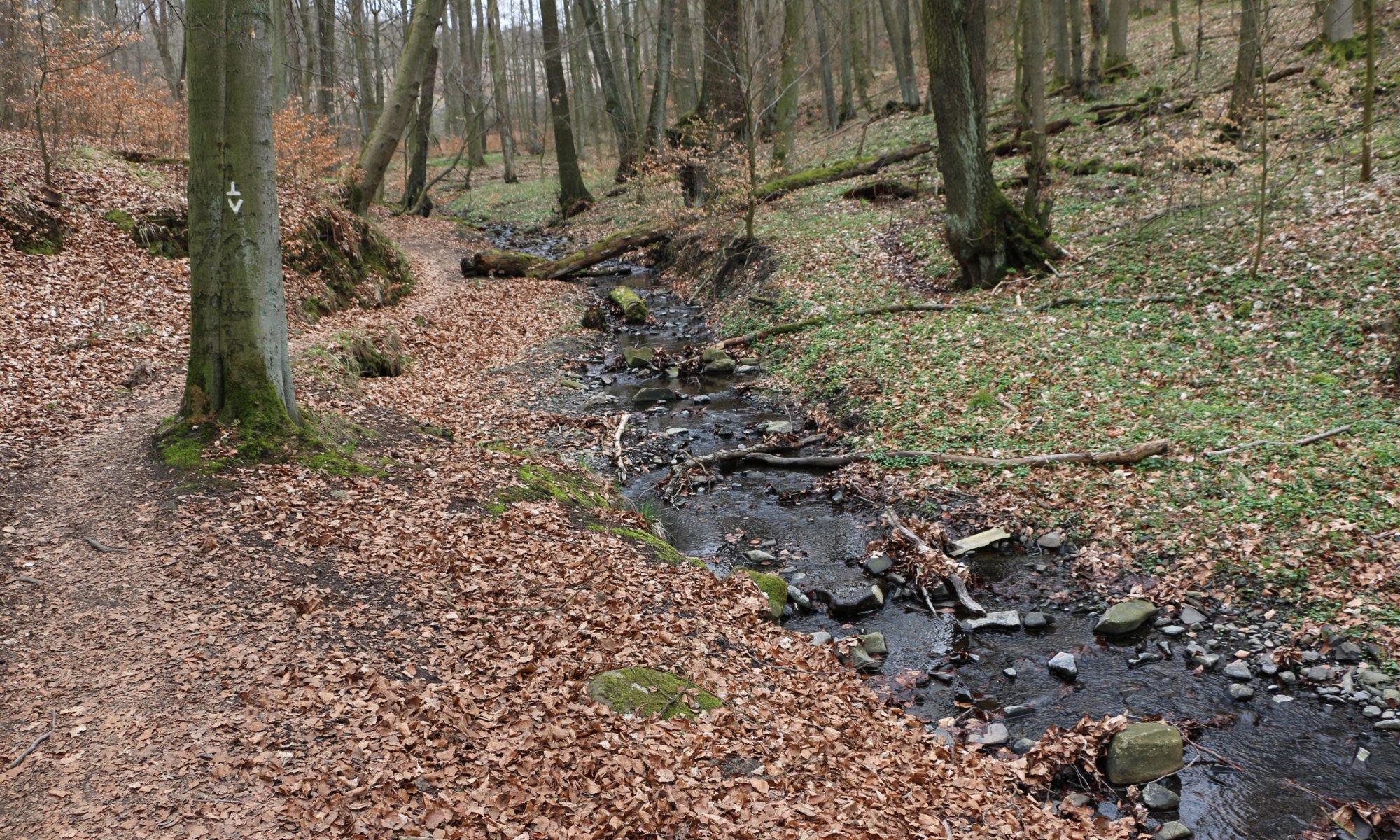 The Naturpark Habichtswald close to Kassel, Germany offers numerous nice hiking trails. One of the best leads along the river Ahne – beginning at its source near the Essigberg. Following this trail you will pass a three kilometers long chestnut alley (the ‘Kastanienallee‘), you can make a detour to the Silbersee lake and you will see the Ahnegraben; an area where the river floats through a deep valley and creates little waterfalls.

The starting point of the trail is the bus stop Essigberg (‘vinegar mountain‘). Take tramway 4 from the city to the tramway stop ‘Druseltal‘ (it is the final stop). There switch to bus 22 which first goes to the Herkules monument and three stops later it reaches the Essigberg. Directly at the bus stop a path starts that is marked with a ‘V‘. On the way straight ahead you will notice a tiny river crossing your way: that is the Ahne river.

Follow the way until you stand in front of the fence of a former ammunition depot, then turn right. After some minutes you need to pass a road and then you’re on the chestnut alley (‘Kastanienallee‘). Enjoy it for about three kilometers until you see the Waldgaststätte Silbersee. It is a good place for a drink or a simple meal. If you prefer to walk on you have to turn left before you reach the restaurant and walk a little bit up the hill. If you want a detour to the Silbersee lake, follow the signs. Elsewise walk down the hill on the left side of the river.

The road is not nice in this section because there is still an active quarry in the area. But after some meters you will see a wooden handrail on the right side that leads you down over a bridge into the Ahnegraben valley. That is the point where the nice path starts and it even has an own name: Fritz-Lottmann-Weg (or ‘-Steg‘, ‘-Steig‘). It is a wonderful trail along a naturally floating river that creates small waterfalls. Sometimes you even have to walk trough the riverbed – that is why this path could be uneasy to walk after days of rain.

Already in 1830 Ludwig Emil Grimm (a painter, one of the lesser known of the Grimm family) wrote about this area and how often he stays here because of its beauty. At the end of the path you will be close to federal road Bundesstraße 251 and the former guesthouse Ahnatal. How you go on from there depends on your fitness and your schedule. Directly at the road there is a bus stop where you can catch bus 110 that brings you to the railway station Kassel-Wilhelmshöhe.

If you prefer to walk on a little bit you can cross the road and walk on the path next to the road leading to Ahnatal (a municipality created in 1972 by combining Weimar and Heckershausen). After 30 minutes you will reach the railway station of Ahnatal-Weimar with RegioTram and railway connections to both train stations of Kassel. But you can also extend the hike until the point where river Ahne runs into river Fulda – it is surprisingly close to the city center of Kassel at the city quarter called Wesertor. On your way you would cross many nice places like the Ahnepark at Vellmar, but from source to water mouth it would be a 26 kilometers long walk for which you typically need seven hours.