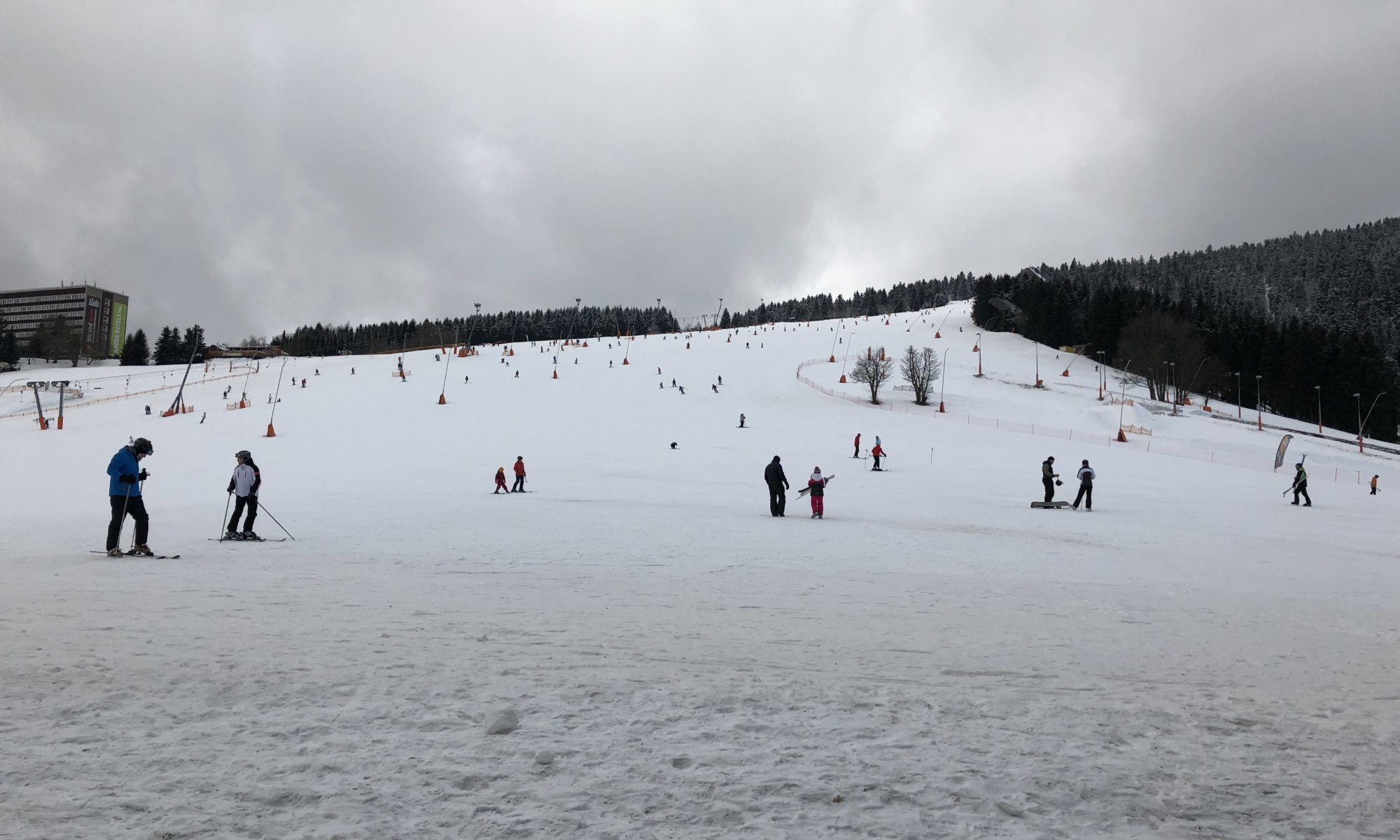 This year we only had two days of snow at home and therefore decided that we need some more. We used two days of school holidays after the first school reports to have a four day long trip. At first we thought about the Bavarian Forest as a destination but then selected the Ore Mountains – because they are simply closer.

As the region was selected we decided not to book a hotel on the German side but in the Czech Republic: because it might be a bit cheaper and because I love to be in other countries. We booked an away home in the Villa Wingolf in Karlovy Vary. It was a wonderful modern one – only the staircase and the ancient and defected elevator remembers of the old times.

On the second day I made a detour while getting rolls for breakfast and took a look at the city center of Karlovy Vary, saw the people drinking water from the hot springs and walked through the mill colonade at the river Teplá.

Then we crossed the Ore Mountains and went to Cranzahl, Germany. There we went on board of the Fichtelbergbahn, a narrow-gauge railway operated with steam engines. It brought us to Oberwiesenthal, the highest city in Germany. From there we took the Fichtelberg-Schwebebahn (a funicular) to the top of mountain Fichtelberg. There we enjoyed the snow, the good views and had lunch at the Erzgebirgsstuben.

Next morning I took the time to have a look at the wonderful orthodox church in Karlovy Vary; the mass of Russian visitors leaves their traces. Afterwards we went to the Markus-Röhling-Stolln in Annaberg-Buchholz, Germany. It is an old mine you can enter with a miners train and walk through it to learn more about mining.

Afterwards we parked our car under the central market place of Annaburg-Buchholz, had lunch at the wonderful restaurant Zum Neinerlaa (with its fine food and child-friendly atmosphere) and bought some traditional local items.

As the Diana tower was closed by that time of the year (you normally can go up with mountain railway from somewhere close to the Grandhotel Pupp, enjoy views, animals and a butterfly house) we went to the Hrad Loket instead. It is beautifully located in a natural loop of river Ohře and on a rock. The castle was already closed but we could walk through the nice city.

Karlovy Vary and Loket were both scenery for the James Bond movie “Casino Royal“. The next day we already had to leave and made a stop at the nice nature protection area Soos not too far away from the border to Germany. We enjoyed the different hot mineral springs between the frosty landscape full of snow – beautiful images.

Going to the Ore Mountains was a good decision. An intensive trip with lots to do and a lot to see – and there is still enough left for more trips like this. And I really loved to see how Karlovy Vary improved over time – it is a nice place to be.