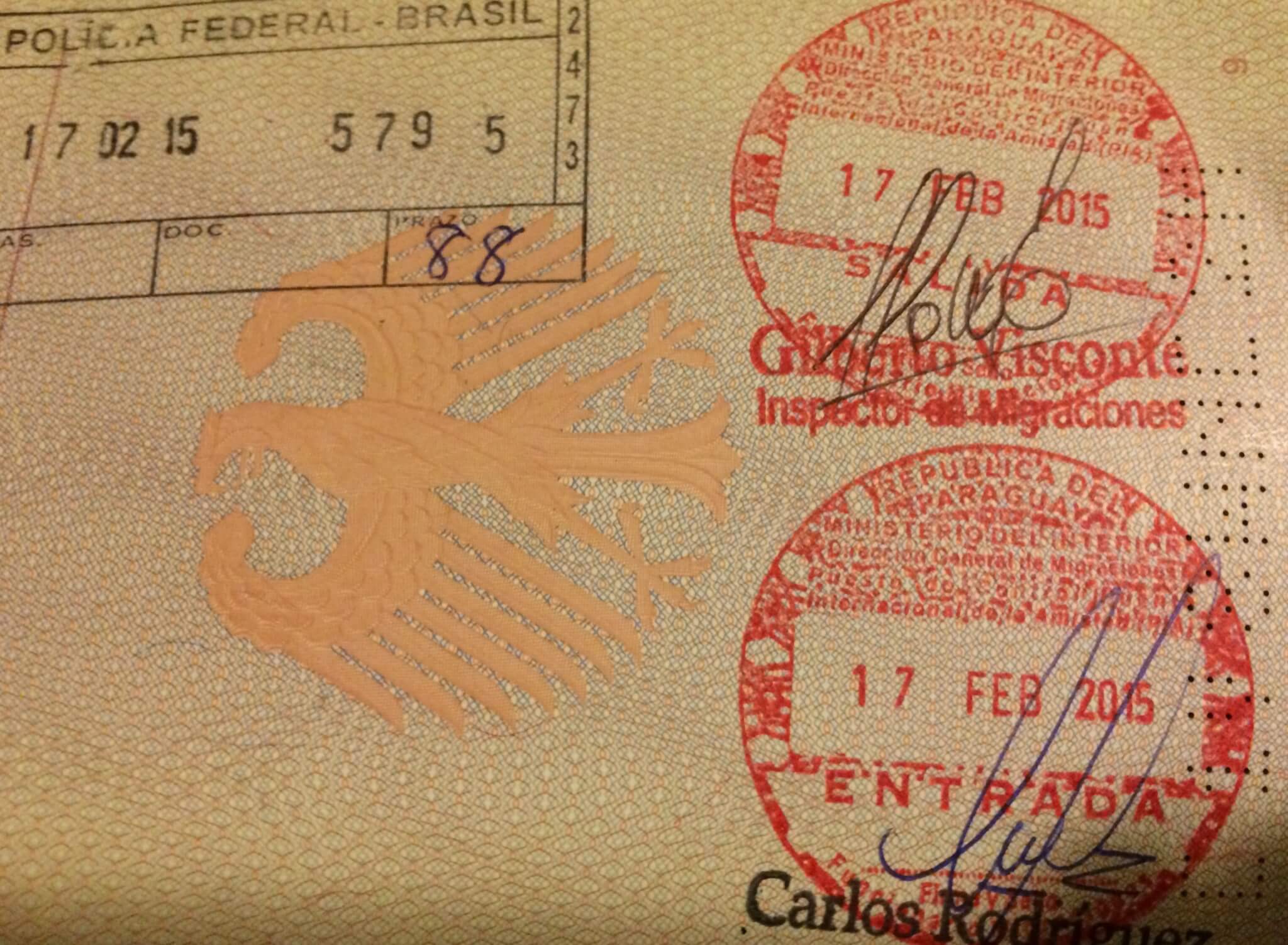 I was at the triangle Brazil / Argentina / Paraguay, I had my hotel in Brazil and visited the Brazilian side of the falls. And I went to Argentina to see las cataratas from there. How to get to Paraguay? It would be possible to walk over the bridge and the border, but the temperatures were to high for such a hike.

According to all I knew Ciudad del Este, the border town of Paraguay was no nice place. It was just good for luxury shopping, organized crime, drug dealing and – according to the United States – international terrorism. But I wanted to see how life is in Paraguay and also to catch a stamp in my passport and some guaraní.

When I had finished visiting the Parque das Aves in Foz do Iguaçu I had to take a taxi, because my tour guide had to return to the Cataratas to search for some Bolivian ladies we had lost. And therefore I decided to directly go to Ciudad del Este. I stopped the first taxi passing by and the driver was a middle-aged woman from Foz do Iguaçu, obviously not speaking English. As I do not speak Brazilian Portuguese and only a little Spanish, communicating was not simple.

I had the feeling that she had to talk and as she was very friendly we created an interesting talk in a strange mix of languages. I’m sure she didn’t understand everything that I said und vice versa. She was driving, let’s say, Brazilian style. And what was really confusing to me was, that she was cursing in German: “Mein Gott!” (“My god!”). As I learned later on, her husband came from Zürich (which she believed to be part of Germany).

We went throughout Foz do Iguaçu to border control, where stopping seemed to be unnecessary. But as I wanted to be safe and sound, I followed the directives: I checked out on the Brazilian side and queued up for entry permission on the Paraguayan side. As I later learned we could have omitted this all. Looking at Ciudad del Este was kind of shocking, the town looked like being part of 3rd world.

After showing me arround by car I wanted to say goodbye and discover the city on foot. But she insisted on waiting for me, which I believed to be a good idea after I saw what the city was like. I wanted at least to pay her for the ride here but she only wanted to hear that I will definitly return – “verdad?” – “verdad!”.

I walked through the streets, exchanged some money and took a look at some shops. What had been advertised already in Brazil was Mona Lisa, a western-style shopping mall for luxury goods. At the city itself there was nothing to see or visit and I’ve been offered cocaine different times.

When I returned to the place which we agreed to, my taxi driver was waiting and merrily welcoming me on the street with a “high five”. Again we took the long march through border control, she turned on Brazilian pop music and sang to it and brought me back to my hotel. And I was sure, we both a had a nice and interesting afternoon.

One Reply to “With a taxi to Paraguay”