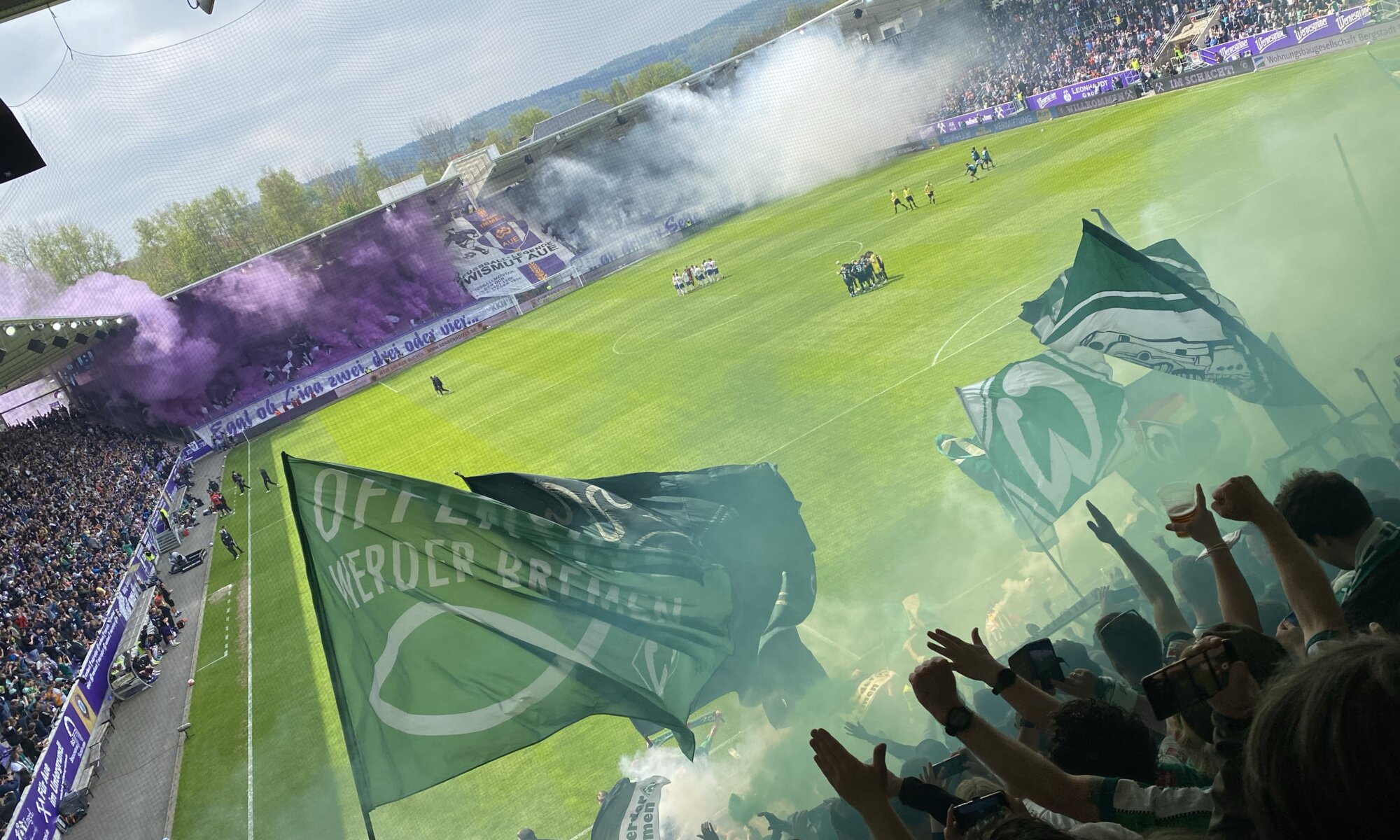 The Erzgebirge (ore mountains) or Krušné hory is a mountainous region belonging to Germany and the Czech Republic. People get there to enjoy nature, for skiing, to learn more about mining history or to buy artisan products like Räuchermännchen (incense smokers) or Schwibbögen (candle arches) for their Christmas decorations. For me it was a long trip by car just for watching a soccer match at the Erzgebirgsstadion, home of the FC Erzgebirge Aue.

It was the penultimate match of the season and this match between my SV Werder Bremen and the FC Erzgebirge Aue was especially important as a huge step for Werder to return to the Bundesliga after one (exiting!) year in the second German league. In the end we won 0:3 (scorers: Marco Friedl, Niclas Füllkrug, Niklas Schmidt) in the ore mountains, giving the team the perfect chance in the last match next week.

The Erzgebirgsstadion is located at the city boundary of Aue-Bad Schlema, next to road B169 leading towards Lößnitz. The Erzgebirgsstadion was built in 1928 (named Städtisches Stadion Aue by that time) and has space for around 16,000 spectators. It was used for different sports in the past but is a pure soccer stadium today. Parking is possible next to this road directly at the stadium and absolutely hassle-free. The special local dish in the stadium is the ‚Nudeltopf‘ – a combination of noodles, meat and cheese; quite unusual in a soccer stadium.

The FC Erzgebirge Aue was officially founded in 1946 but the predecessor FC Aue has its roots already in 1908. In the German Democratic Republic (GDR) the club was champion in 1956, 1957 and 1959; it won the national cup (‘FDGB-Pokal‘, named after the association of unions Freier Deutscher Gewerkschaftsbund) in 1955. The current name was chosen in 1993 to show how important the club is for the Erzgebirge region. I don’t know a lot of clubs that had so many different names over time: FC Jung Deutschland, FC Alemannia Aue, BSG Pneumatik Aue, BSE Wismut Aue, SC Wismut Karl-Marx-Stadt, FC Wismut Aue. Absolutely confusing.

The ‘Wismut’ in the former club’s name stands for a company that was mining uranium for the Soviet Union at the Erzgebirge during GDR times. The fans and also the public announcer name their club ‘Wismut Aue‘ and not ‘Erzgebirge Aue‘. The club still relates to the mining history of the region using the symbols of miners and naming their stadium the ‘Schacht‘ (shaft). They also sing the miner’s song (the Steigerlied) before matches. Glück auf!