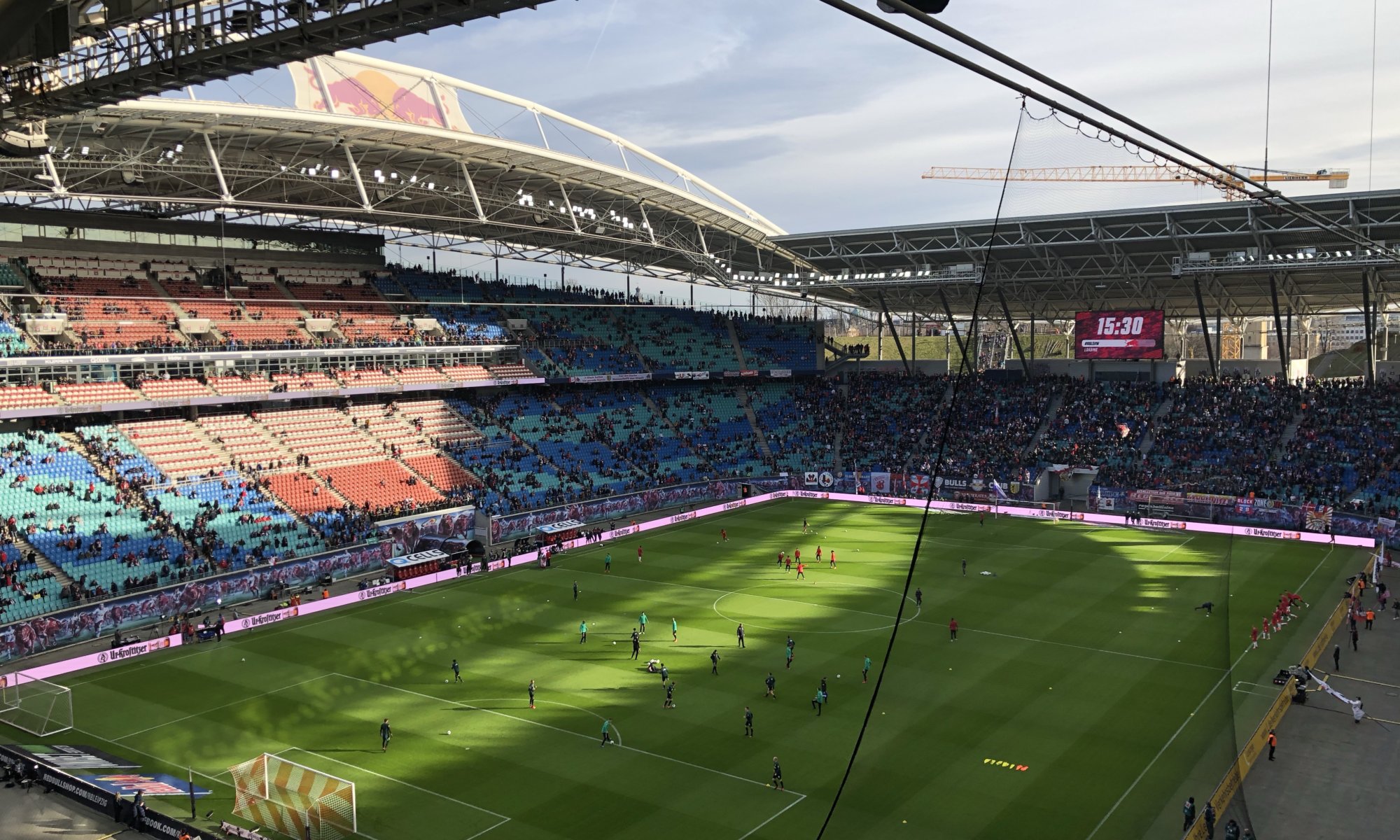 Getting to Leipzig, Germany, for a soccer match brings mixed feelings. If you think of soccer in the city you might think of the formerly very successful VfB Leipzig, the 1. FC Lokomotive Leipzig or the BSG Chemie Leipzig. But of course, you need to discuss RasenballSport Leipzig or short: RB. It is an artificial soccer club founded by energy drink producer Red Bull and I really dislike the idea that a company producing drinks in cans has so much influence in the German Bundesliga – also superseding old clubs with a long history. But RB fulfils the desire of the people in Leipzig to see good soccer matches and as the soccer clubs from the former German Democratic Republic (GDR) are massively underrepresented in the Bundesliga you might also find good aspects in this.

Red Bull wanted to own a club to do marketing for their products. They tried to buy the FC St. Pauli, 1860 München and Fortuna Düsseldorf. Without success. They wanted to have the name of the club, the emblem and the colour to be changed towards the corporate design of their company. That was impossible in Germany (in contrast to Austria, where you can now see matches of Red Bull Salzburg). Therefore in 2009 they founded their own club called RasenBallsport (RB, like Red Bull) and wrote a success story. In 2016 they arrived in Bundesliga. The emblem contains two red bulls like the company logo, the club is advertised as the ‘red bulls’ and a mascot in form of a red bull is jumping around in the stadium (only the crazy public announcer running around in a red suit is more annoying).

Within the stadium, you get the products of Red Bull, only light beer (WTF?) and surprisingly also cacao and juices. The stadium itself has a much longer tradition than the club – the place was used for sports since 1867. The arena exists since 1965 and was built on wreckage created by World War II. It was called the Zentralstadion or Stadion der Hunderttausend and was the largest stadium in the GDR. It was torn down in 2000 and rebuilt in a modern tent-like style in 2004. It is very special as it is located within a pit – to enter it you have to walk up the hill and then down into the stadium. If you take a look at the surroundings you can see that it is all very old – especially the stairs leading up look in some sections very much ancient.

Unfortunately, you can’t see too much of the stadium and you can’t really walk around it in a good way. It is worth to have a look at the ancient entrance facing the city and the old tower in the South (in front of the Festwiese). The entrance for the supporters of guest teams is located next to the water. The stadium officially has no standings but you can fold your seats. In the beginning, they are also playing the club hymn of the guest team (which is a nice gesture) but the public announcer was unable to pronounce the names of the players correctly. The upper stands where moving heavily (as if there was an earthquake) when the supporters of Werder Bremen were jumping collectively – I really had to trust the architects of the stadium.

It would have been really important to carry some points home after the match (as Werder is very low in the scoring board currently) but it became a bitter defeat. You can reach the stadium on foot from the main railway station within 35 minutes. If you rather like to take a tramway this is also possible – the best stop is ‘Sportforum Süd‘. There are also shuttle buses on match days.