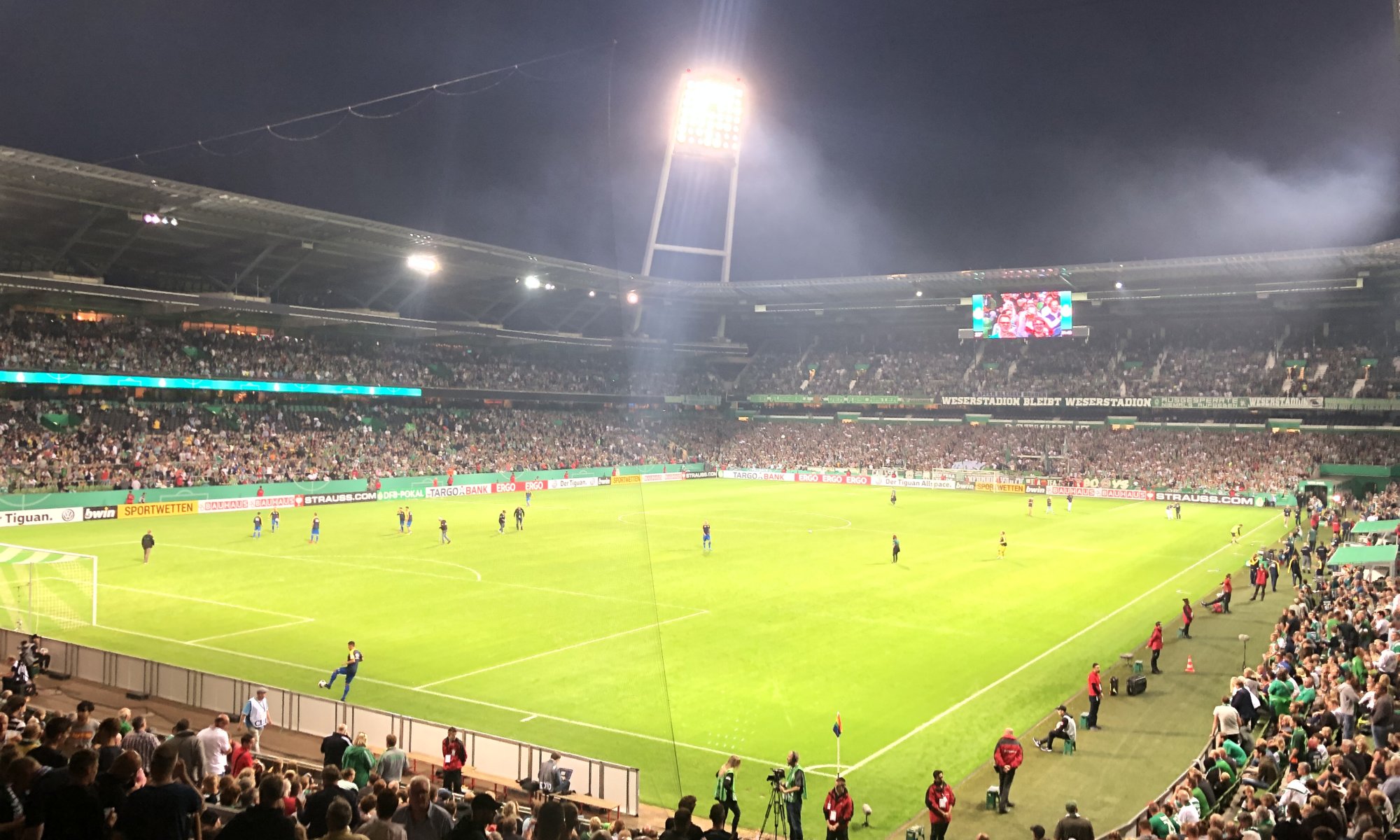 I‘m in love with the first round of the DFB cup every year. The small clubs – sometimes even amateurs – against the big clubs. Teams that hope to get the FC Bayern or Borussia Dortmund as opponents to have the match of their lifetimes and fill their bank accounts – even if it means to loose with many goals against. But it is also about infrastructure, about playing in small stadiums where everything is a little bit improvised and where the big stars have to use rather shabby changing rooms without hot water.

And then there is the chance of a big surprise – clubs from lower leagues that can kick Bundesliga clubs from the cup. And that happens pretty often, as the Bundesliga starts late in contrast to the lower leagues and the big clubs haven‘t had enough preparation matches. That is why I like to see first round matches and why I‘m willing to travel even far for them.

This time the drawing created a unique match for my favorite club: Werder Bremen had to play against Atlas Delmenhorst, an amateur club from the Oberliga of Lower Saxony. Delmenhorst is just 13 kilometers away from Bremen and most of their fans are also supporters of Werder. In round 1 the matches always happen in the stadium of the smaller club (or a bigger stadium nearby) and it is not allowed to switch that. It would lead to smaller clubs selling their right to play at home.

In this case that rule created a problem as the ‚bigger stadium nearby‘ would be the Weserstadion of Werder Bremen and having the match there was forbidden. Luckily the German football association (DFB) – which is not known for its flexibility – changed the rules. Already in the past all clubs participating had to name the stadium or the stadiums they would potentially use before the drawing. Now, if the opponent is homed in one of these stadiums it is still allowed to be used.

That‘s great but it creates a bizarre situation: Werder Bremen was the away team in its own stadium. The team just kept their changing room and the Werder supporters kept their stands in the Ostkurve (it would have been a big affront to give it to the fans of another team). Before the match the president of Atlas thanked the ‚guest‘ team for the support in organizing the event (he had no staff, no knowledge and no money as he said, but Werder took over). With tears in his eyes he said he might cry for joy – and that he thinks he might simply just do it.

It‘s always a dream for amateur teams and for everyone from Delmenhorst on the field it was an evening they will tell their children and grandchildren about. First Yuya Osako and Niklas Moisander scored for Werder – but then Tom Schmidt took his chance to become a hero of Atlas by scoring against goalkeeper Jiri Pavlenka (‚the octopus‘). The sensation didn‘t last too long as Milot Rashica and Davy Klaasen stabilized the result before the end of the first half.

In the second half coach Florian Kohfeldt fulfilled the wishes of Atlas and brought the grandseigneur of Werder onto the green – and Claudio Pizarro scored twice making it a 1:6 victory for Werder. A nice away victory at home and a wonderful cup evening for the supporters of both teams.