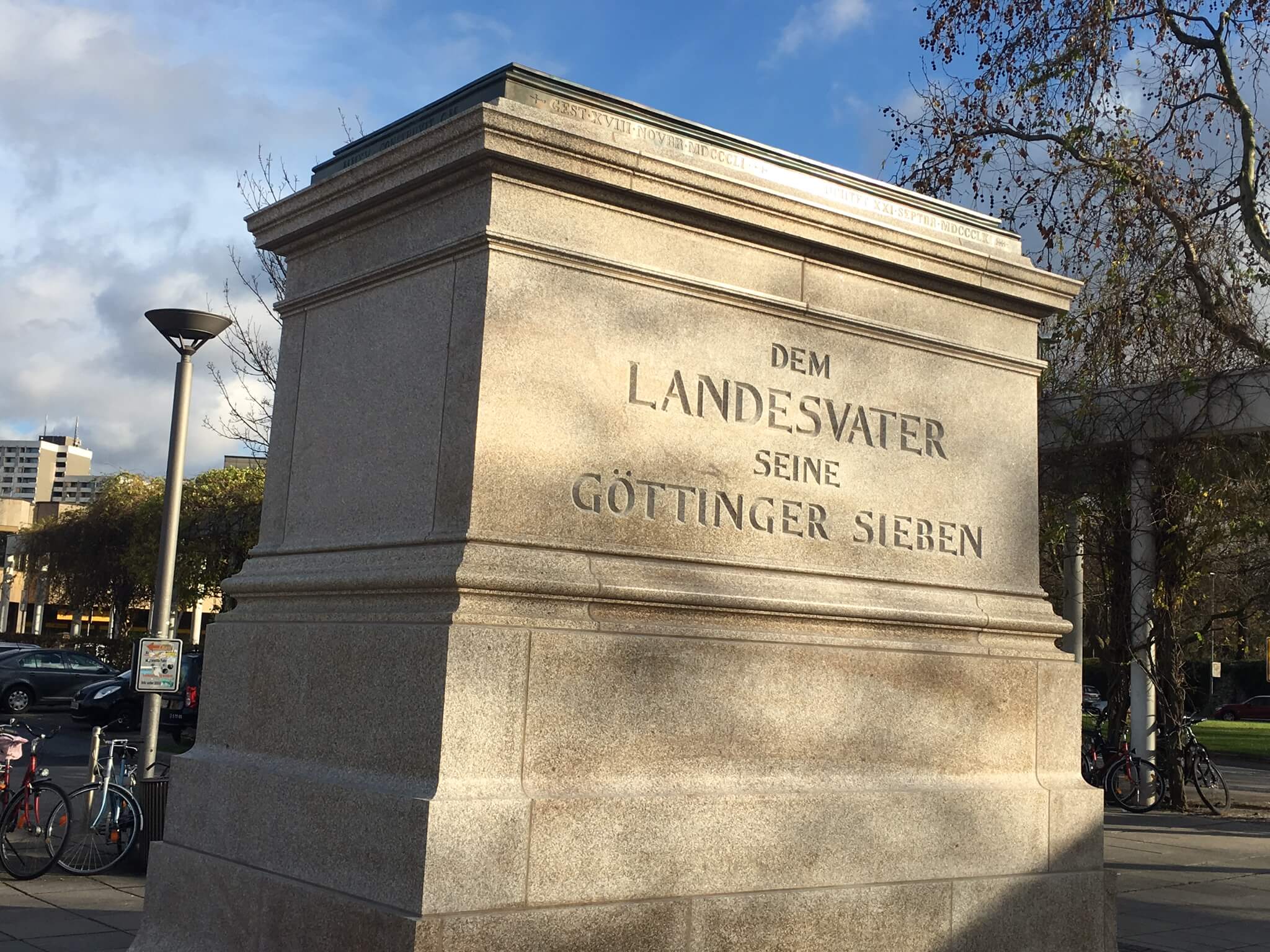 If you are leaving the railway station in Göttingen, Germany you cannot miss to see the newest monument in town. The privately funded pedestal by artist Christiane Möbus is at first sight a mere copy of the Ernest Augustus memorial close to the railway station of Hanover – without king Ernest on top. Uncovered just some days ago it has already attracted a lot of mockery and malice.

People claim that Göttingen is simply copying Hanover. They dislike the thought that something is missing and they even find it bold that the artist has put her own name in one row with those of the seven professors. And they say that the monument doesn’t speak for its own and needs explanation.

I must admit that I really love it, but I accept that with this I’m part of a very small minority in my hometown.

The original in Hanover says “Dem Landesvater sein treues Volk” (“To the father of the state from his loyal people“) and it carries Ernest Augustus on his horse. The version in Göttingen says “Dem Landesvater seine Göttinger Sieben” (“To the father of the state from the Göttingen Seven“) and it is empty. Empty as the chairs of the Göttingen Seven after their dismissal by the king. On the reverse side the names of Friedrich Dahlmann, Wilhelm Grimm, Jacob Grimm (both known as the fairy-tale writing Brothers Grimm), Eduard Albrecht, Georg Gervinus, Wilhelm Weber and Heinrich Ewald are listed – and the one of the artist, showing that one should join in. This addition is indeed audacious and bold, but it is really a catalyst for discussion.

The story behind this all is, that in 1837 when Ernest became king of the Kingdom of Hanover he stated that he doesn’t accept the constitution of the state. He wanted to rewrite it to reflect his very own interests. Friedrich Dahlmann, who took part in the process of writing the current constitution formed a group of seven professors of the University of Göttingen which protested against this act. As a reaction they were dismissed and three of them had to leave the country within three days. Today this rebellion against state authority is seen as a base for the creation of a liberal republic in Germany.

I really like the monument because it directly leads the viewer to some questions: Why is it empty? Is there something missing? Who were the Göttingen Seven? Which father of state is meant? And the answers to these questions lead to discussions about monarchy, democracy, state authority and necessary rebellion.

As a lot of critics say that the monument has no aesthetic value and doesn’t work without explanation: I say, it has its very own aesthetics which are inherited from the original pedestal in Hanover. The massiveness of the pedestal showing domination. The height setting someone or something above everyone else. The classic decorations showing a form of elegance. With the statue missing one starts to look at the function of the pedestal.

And there are even many monuments in Göttingen, that tell you nothing at first sight: The “Doppelkentaur” close to the city hall, the fish next to the old library, the “G7” at the university (both from Günter Grass) named as examples. The monument to the Göttingen Seven is a memorial in best sense. In German a memorial is a “Denkmal” (“think once”) and this one I would also classify as a “Streitmal” (“dispute once”). It has a great potential to get people to think, discuss and dispute – about history, authority and even monuments. And that’s a great value.