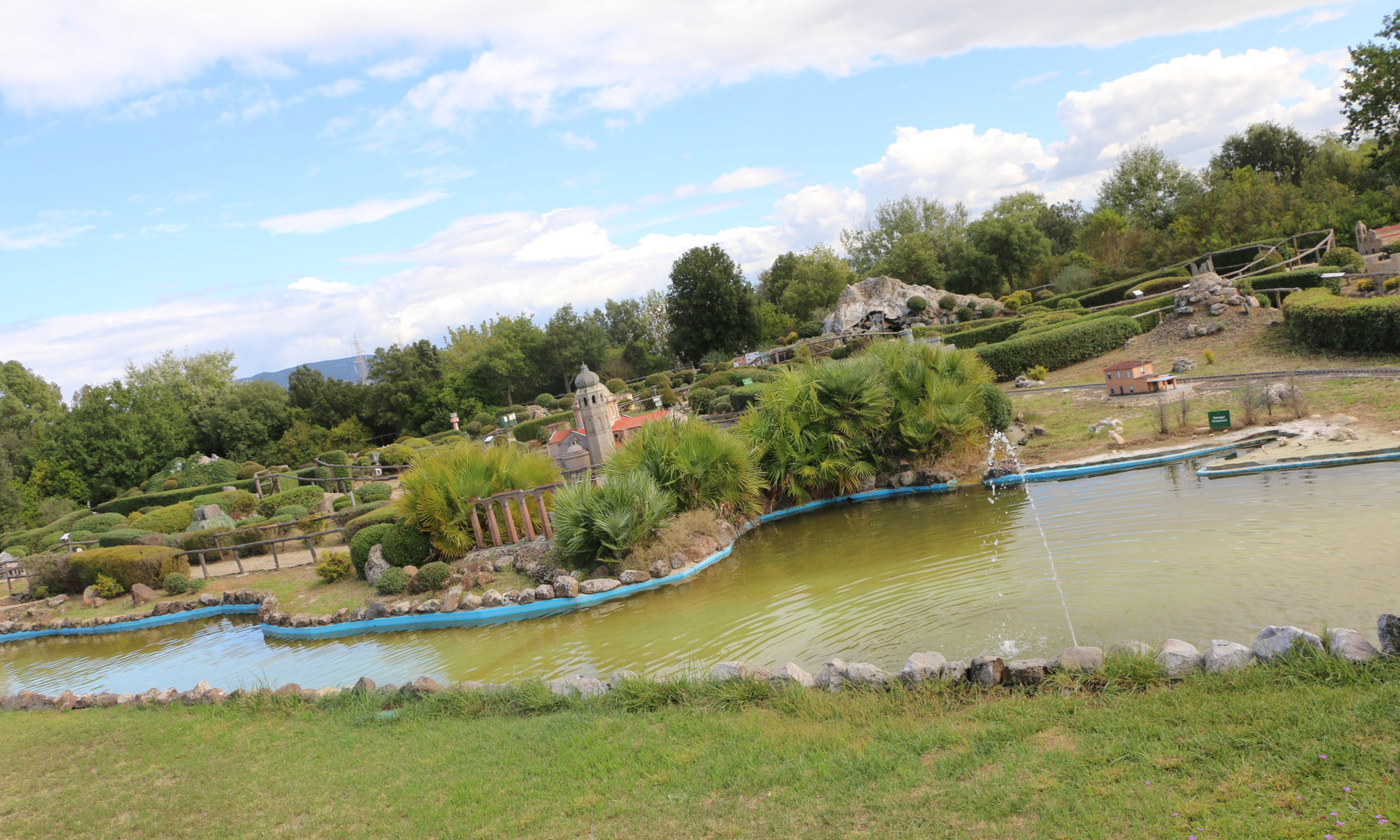 We came to Sardegna at the end of September and besides the natural beauty of the island, the many nuraghe and caves there were no big tourist highlights open – at least not in the south of the island. All water parks were already closed. But one nice location for children was still open: the theme park Sardegna in miniatura at Tuili, Italy – not far away from Barumini.

I’m happy that they hadn’t closed already as only six families were at the theme park with us together. The park consists of different sections and the most important is the miniature world with Sardegna in small scale and surrounded by water. You can walk on the island and see all the important places. There has already been a lot of deterioration; trains and funicular are not operating anymore, the ships and the airport look pretty old.

It is somehow like Minimundus at Klagenfurt, Austria or Madurodam at Den Haag, the Netherlands. This section definitely needs some repair works but it is still fun for kids. The next section is a dinosaur park with large animated dinosaurs and animals from the ice age – all known from the movies named the same. Big fun for kids! A third section of the park shows life during the time of the nuraghe omnipresent on the island.

For the last two parts of the park you’ll get entrance times written on your tickets when buying them. The guided tours always start in front of the bar. Most interesting is the animal world where they show you local and exotic animals. This includes giant African snails, lizards, a chameleon, and koi carps. There is also a small aquarium with different species, including piranhas.

The animal world was the star of our visit as we could feed koi carps by hand and hold a chameleon and a lizard. It’s nice to experience a chameleon climbing on your fingers but especially during high season this must mean a lot of stress for these animals. The second tour brings you to the space museum (where your can see space suits, asteroid parts and measure your weight on mars and moon) and the planetarium. Not knowing Italian well enough was a big disadvantage on these guided tours – but we met some friendly Italians that could translate a bit.

In addition to these highlights you can take a round trip in a street-bound ‘railway’ and by ship around the miniature island. Short tours but fun for younger kids. Within the park you’ll also find a bar, a souvenir shop, a picnic area and a playground. When arriving you have to choose between two tickets: you can have everything or exclude the two guided tours (animals and space/planetarium). As the animals were the highlight I would recommend to take the full package.

The visit to the park wasn’t cheap. We payed 52 Euros for two adults and a child. It is nice to spend a day here but you shouldn’t arrive with the expectations you would have towards such a park at central Europe – elsewise you will be disappointed. Getting here with grammar school kids is great, older ones might miss some more adventurous attractions.

One Reply to “Sardegna in miniatura”