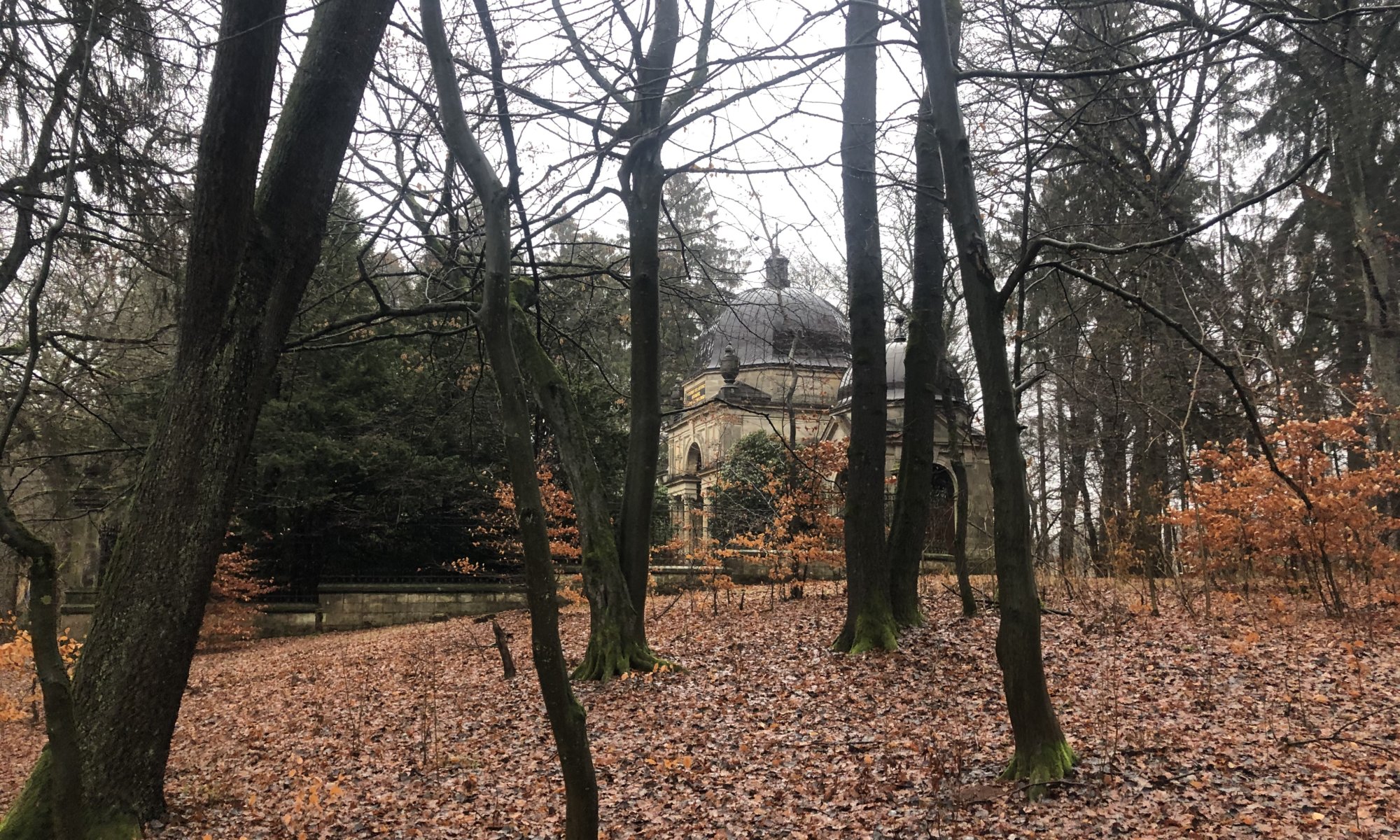 When you’re driving on Bundesstraße 7 between Kassel and Eschwege, Germany you might spot a sepulchral chapel in the forest. Finding the path to this place close to Hessisch Lichtenau isn’t easy but worth a try. You will not only find a mausoleum at a lake and a closed giant orphanage – but also a sad story about life and death. And about a man without a family who gave all his wealth to support children – and with that created himself a memorial.

To understand the history of the mausoleum and the area around it one has to know the life of George André Lenoir. His father was a Huguenot from Metz, France but he was born at Kassel in 1825. He was a physicist, chemist and entrepreneur. He studied at Kassel and Paris, France. Then he went to Wien, Austria and opened a business producing microscopes – but the product range was extended pretty fast. He also founded a publishing house with his younger brother Jean Conrad Lenoir, but he died much too early in 1872. The money he earned was invested into real estates. This included to buy the spa hotel at Sliač, now Slowakia and the grandhotel ‘Meraner Hof‘ in Merano, Italy (Alto Adige). George André Lenoir had massive success in business, but no family and no children.

Getting older George André Lenoir understood that shrouds have no pocket. Inspired by the ideas of educationist Heinrich Pestalozzi he offered his birthplace Kassel to open an orphanage for children – with no regard of their confession or origin. Therefore he registered a foundation named ‘Stiftung der Brüder George und Conrad Lenoir‘ – by including the name of his younger brother he took the chance to honor him. In 1901 he bought a piece of land at Fürstenhagen, three kilometers west of Hessisch Lichtenau and built the orphanage there. The institution should be financed by a farm on the grounds and the revenue of the spa hotel at Sliač and the grand hotel ‘Meraner Hof‘ at Merano. 6.5 million Goldmark were brought into the foundation and Lenoir ensured that the foundation became the property of the city of Kassel. That is why Kassel owns this land outside of the town itself.

The orphanage can be seen today at the Lenoirstraße of Hessisch Lichtenau. It consists of three impressive main buildings with a big Pestalozzi memorial in front of it. It looks like a magical but lost place. A metal fence encloses the area. When Lenoir came to Kassel at the end of his life he stayed there surrounded by many children living together in family-like groups. Some meters further on and next to a lake you can find the mausoleum which has been built between 1903 and 1904. It was created by architect Julius Eubell in Italian style, related to the architecture of Firenze, Italy. The inscription on the building says ‘Friedhof der Stiftung der Brüder George & Conrad Lenoir’. In the middle section once two busts existed that have been stolen.

George André Lenoir had achieved what he wanted to when he died in 1909 at Merano, Italy. He was brought to Fürstenhagen and was buried inside his mausoleum. His foundation was financed good and had enough money to operate further on. But then World War I and inflation came. The city of Kassel sold buildings and in the end the orphange had to be closed in 1928 – 20 years after opening it. Later the buildings were used for different social purposes, like housing emigrants. From 1950 to 1983 children returned as the buildings were used by the Auguste-Förster-Haus, the children’s home of the city of Kassel. Later the orphanage deteriorated while being empty and was sold for a ridiciously low amount of money. Today it is offered by the new owners on the Internet – until today without success. Now the Lenoir foundation only owns the mausoleum itself. When I visited the mausoleum I met a man who was living for 13 years at the orphanage and is now caring since more than 30 years about the mausoleum. It is his voluntary and unsalaried work that keeps this place open and in good shape.

Accessing the mausoleum seems to be a little riddle that every visitor has to solve. Some major maps are are not very helpful to find the way. The main entrance seems to be at the Bundesstraße 7 (B7) – a very heavily used road. There are no parking lots and you cannot securely walk along the road. Therefore it’s best to leave the B7 and try it from the south – from the Fürstenhagener Straße belonging to Hessisch Lichtenau and leading to Fürstenhagen.

From the Fürstenhagener Straße you have two good options to access the mausoleum and the best is to follow the sign ‘Bauhof‘ (building yard) to the end of the street ‘Zum Teichhof‘. The person caring about the building told me that it is best to park your car there (and that it is allowed!) – because the way then is short and paved. An alternative is to go to the stadium at the Lenoirstraße and park there. Then you can see the old orphanage and the renaturalized river Losse on your way – but your might also get stuck in mud. See the two alternatives on the map below (click to enlarge).