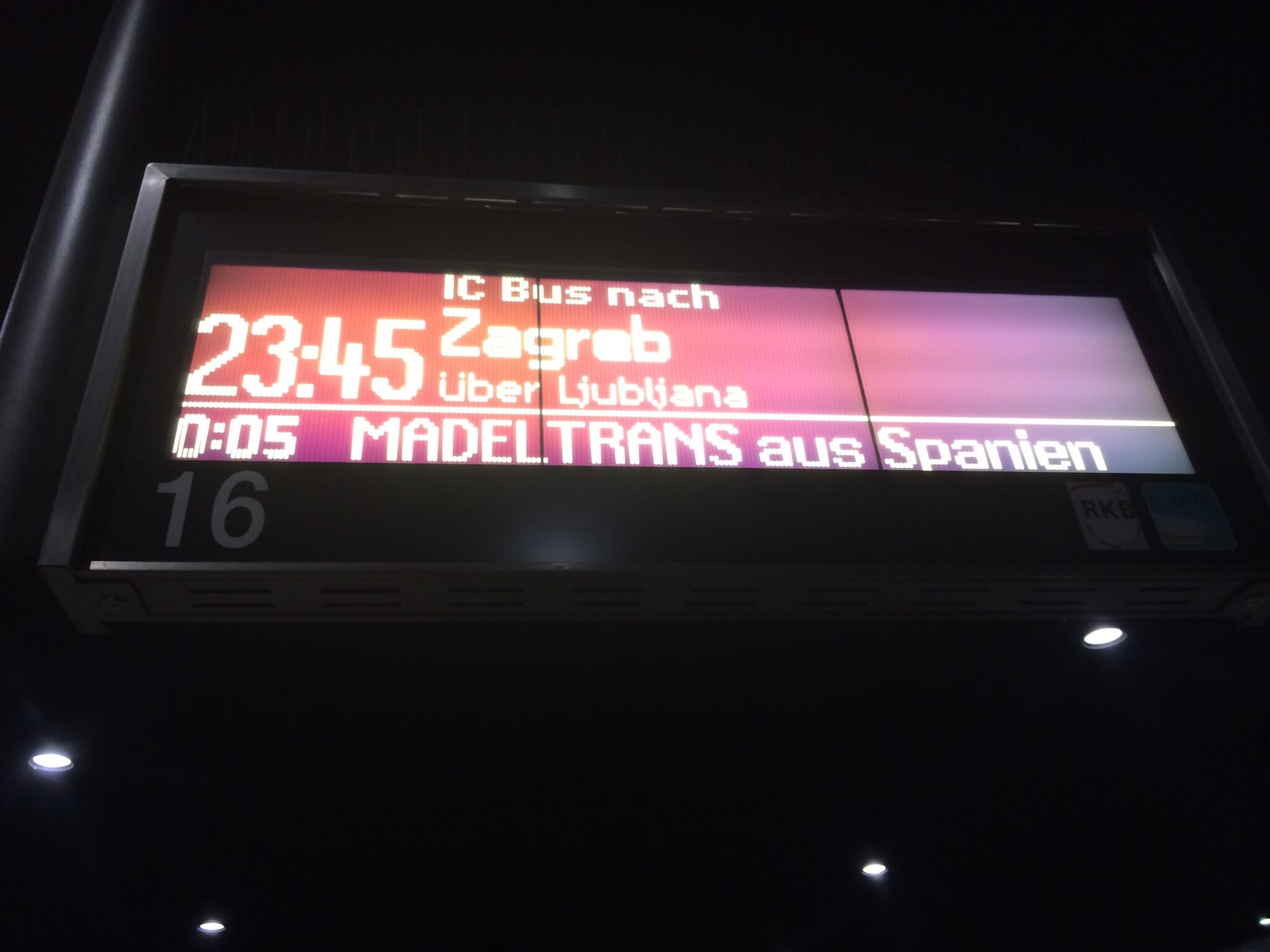 Normally I try to travel to nearby countries by train. But this time I chose to go by long-distance bus the first time of my life. I went to the Hackerbrücke in München, the bus terminal of the Bavarian capital. I took an IC Bus from Deutsche Bahn that was not really comfy and I didn’t get too much sleep. But therefore I arrived in the early morning at the bus terminal of Zagreb (Agram) and could immediatly start to explore the capital city of Croatia.

Zagreb is one of the European capital cities that is recognized and visited less by western Europeans – and that by no means. Different airlines go to the small airport Pleso in the outskirts of the town. Several bus companies send their vehicles on the seven hour long trip. In addition, the EuroCity train is going to Croatia – but it needs more time than a bus because of the state of the railway network. However the slow tour across Austria and Slovenia is especially charming.

A good start for a visit to Zagreb is the railway station Glavni kolodvor in the lower part of town. Here you’ll find the “green horseshoe”, a wide green corridor with the shape of a “U”. Along this green area the most important museums, the botanical garden and art galleries are located (I specifically liked the modern gallery). The horseshoe is nearly completely enclosed by old buildings decorated in the styles of secession, renaissance and art nouveau.

North of the lower city is the Ban, the central place behind which the two original city centers are located. On the one hand the clerical town Kaptol in which you’ll find the market place (Dolac) and the cathedral. On the other hand the town of the citizens (Gradec), which includes the parliament, the seat of government and the Lotršcak tower (be aware that at noon they traditionally fire a cannon there, no need to worry).

Gradec is situated on a hill and is reachable by a vast number of staircases. Who prefers an easier way up to the parliament and Trg svetog marka can take the pretty old funicular Uspinjaca that goes fastly from the lower town to upper town. Between Gradec and Kaptol you’ll find the Tkalciceva with numerous coffee shops and bars which make the mediterranean whether really enjoyable.

Zagreb has an adequate infrastructure for tourists but in contrast to Prague or Budapest it is still authentic. You won’t find touristy things like hop-on-hop-off busses here and international fast food chains are not dominating the city. The street car and bus network is porous but sufficient for tourists.

If the people of Zagreb need to relax they go to Medvednica (bear mountains) close to Zagreb – the natural protective barrier of the city. A nice alternative is the park Maksimir in which you’ll find the zoological garden of Zagreb. In the south the railway tracks consitute a natural border, followed by river Sava. Who passes over will get to the gallery of contemporary art and sees the blatant difference between the European historical city center and the oppressive housing conditions.

The sights of Zagreb are concentrated within the city center and the areas of Gradec and Kaptol. All important sights can be reached on foot, even if you sometimes have to climb up some meters. A weekend is therefore sufficient to explore Zagreb – but this definitly belongs on every todo list.