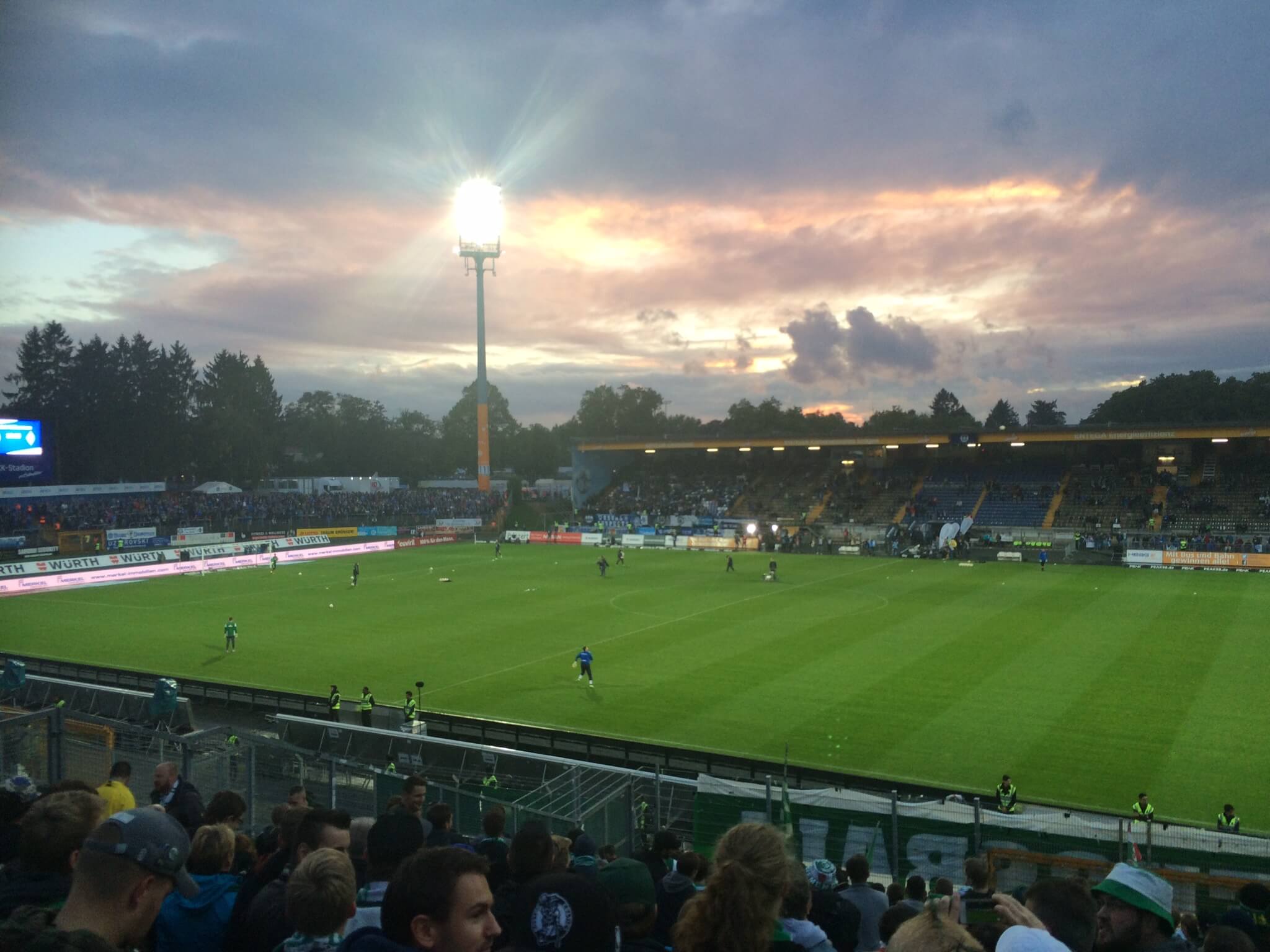 The Stadion am Böllenfalltor – its name referring to a city gate and cottonwoods standing there in earlier days – is a soccer stadium in Darmstadt, Germany. It currently holds up to 17.000 supporters and is home to the SV Darmstadt 98, wearing blue and white and calling themselves “The lilies” – because the lily is part of the city arms of Darmstadt.

The magic of the Böllenfalltor roots in the fact that it doesn’t look like a stadium built for Bundesliga. Darmstadt wasn’t part of the first German soccer league for 33 years and just returned in 2015. Compared to a place like the Allianz-Arena in Munich these two stadia have nothing in common than the greenfield in the center. And it is a wonderful thought seeing the superstars of the FC Bayern going back to basic at this plain place.

Another great thing is that there aren’t many seats, most people are standing during the match – and I love standing at a stadium, it contributes much to the atmosphere. At least you’ll have to prepare well when going to see the lilies: only 3.500 seats for the home fans are covered by a roof. All the rest of the supporters gets the direct contact with rain or snow.

The stadium is located in the south-east of Darmstadt, more than an hour to walk from Darmstadt Hauptbahnhof. But don’t worry, there is a good direct connection by tramway from the railway station to the Böllenfalltor. If you start from the city center, catch one of the trams at the Luisenplatz, the main square.

If you’re about to see the match from the stands of the guest team, be ready to walk some minutes more: the entrance is on the rear side and you have to walk through a forest to get access to it. But therefore you will be welcomed with a very good bell pepper sausage, beer from cups without deposit and no special card-based payment system; just cash like in the good old days.

The fans of the SV Darmstadt 98 have proven to be friendly guys and real supporters – their chants and choreographies are absolutely suitable for the Bundesliga. Coming up directly from the fourth league within only five years seems to have been a good training even for the fans. If you are surprised that they all call themselves “Heiner” (a typical German first name) – also they don’t even know where this tradition really comes from. A “Heiner” is a inhabitant of Darmstadt who also speaks the dialect of this region; a native of Darmstadt, lets say.